There are certain dishes that are foolproof and just right. These dish have that magical combination of ingredients that really don't need to be (and arguable can't) be improved. They are already perfect. I believe this Nobu black cod recipe just might be one of them.

I saw "sablefish" in the frozen section of Trader Joe's the other day. Sablefish (also called "black cod" or "butterfish"), is a buttery, high fat white-fleshed fish that can be found in the Pacific Ocean, both near Alaska and also the US Pacific Northwest.

Sablefish is very nutritious, having about the same amount of omega-3 fatty acids as salmon. It's a rich, fatty fish which seems to "melt in your mouth" like butter, thus the nickname "butterfish."

I love this simple yet super flavorful recipe from Nobu's cookbook. This rich fish picks up tons of umami from the magical combination of miso, sake, and mirin. It's foolproof, super easy, and tastes fantastic every single time. 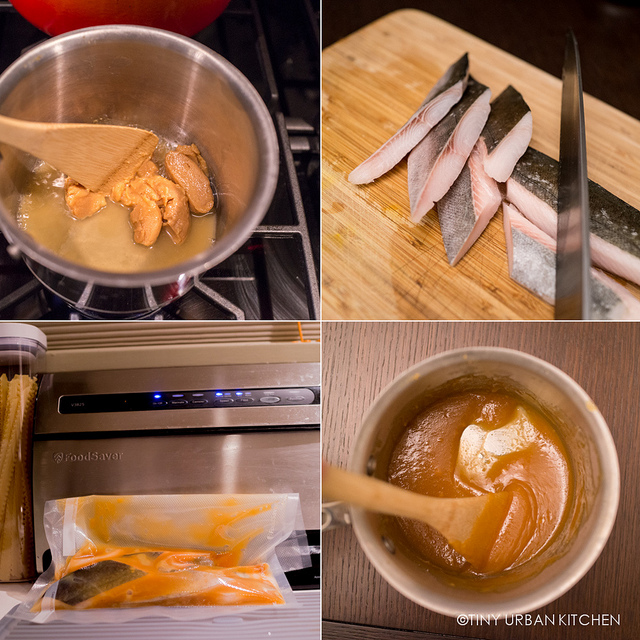 Heat shiro miso (white miso paste) together with sake, mirin, and sugar in a saucepan until everything is melted. Marinate the black cod overnight (you don't have to use a vacuum bag, but I like to maximize the amount of fish that "fits" with a certain amount of marinade, and I find I can save on marinade if I use the bag).

The next day, try to remove as much marinade as possible from the fish (I wiped it off with my fingers). Then simply sear the fish on a hot cast iron skillet until nicely browned (2 minutes), and then finish in a  400 °F oven for about 10 minutes, or until flaky and done. You can use the broiler instead if you don't want to sear.

This recipe is forgiving of mistakes and it can still tastes pretty good despite minor mishaps. The first time I made it, my oven wasn't nearly hot enough, so my "broiled" fish became more like a steamed fish. It looked awful, but it still tasted pretty good. The marinade speaks for itself. Also, sablefish is pretty rich, so you can overcook it a bit and it won't taste completely dried out. In other words, if I want something easy that's reasonably foolproof, this isn't a bad dish to make!

Bring mirin and sake to a boil. Add white miso paste and mix until smooth. Add sugar and heat until melted. Let cool. Combine with black cod and place in a vacuum bag or a baking dish, making sure the fish is completely covered. Let marinate in the refrigerator overnight.

Preheat oven to 400 °F. Heat up a cast-iron skillet (or grill pan) and briefly sear the fish until it is browned (about 2 minutes). Cook in the oven until flaky, about 10 minutes.

And it's not too late to vote for my lamb recipe here! We're getting down to the wire, with only a few days left for voting. If you haven't voted yet, please stop by. No registration or anything necessarily - just click and vote!

Have a great day!