I've been to Tokyo over half a dozen times, yet I could never find the energy to drag myself out of bed the wee hours of the morning to visit the Tsukiji Fish Market auction. It wasn't until the news came out that Tsukiji Fish Market was moving that we started to take notice.

The current market needs an upgrade in refrigeration technology, is vulnerable to a big earthquake, and takes up valuable real estate in the center of the city.

The move date has been pushed back from the originally scheduled 2016 date, but it's inevitable. Tokyo's governor Yuriko Koike wants to move it before the 2020 Olympics in Tokyo. The current plan is to move the market to Toyosu, a manmade island of reclaimed land outside the city center, in autumn of 2018.

So when we visited Taiwan in February of 2017, we concluded it might be our last chance ever to see the old-school Tsukiji Fish Market auction in its original 80+ year old location. Tsukiji Fish Market limits the number of people who can watch the auction to 120 people per day, 60 people for the 5:30 AM auction and another 60 people for the 6AM auction. The advice we got from most people was that you had to show up by 3AM in order to get a spot, 2AM to be safe. In the summer, the lines are longer.

Because this was likely our only shot (maybe ever!), we decided not take any chances (even though it was winter when we were there). We showed up around 2:15 AM and found ourselves the 6th and 7th people in line, ha ha.

At around 3AM, a worker came and opened the door, allowing us to go inside a waiting room. The worker handed us a green vest, signifying we had made it in. Woo hoo! 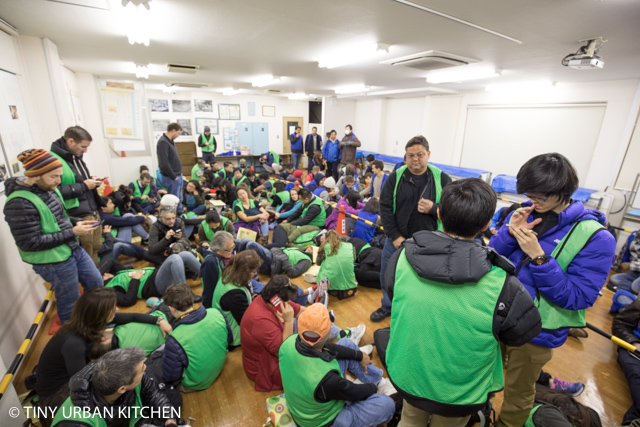 Before 4AM, the room had filled up with all 120 people and they closed the door. For the next hour, we sat and waited inside. Thankfully, there were nice toilets right outside the room that we could use. Some people tried to sleep, but it was pretty hard. At around 5AM, a tuna fisherman caught all of our attentions. He told us he had been working as a fisherman for close to 20 years, and he shared with us some background about tuna fishing as well as about the market. It was really helpful to hear his perspective (snippets of which I will share in the next couple paragraphs), as well as get an orientation of our upcoming visit.

And then it was time!

At 5:25AM they escorted the first group (us!) out of the room, through a path that went by some warehouse-like buildings (it was dark, so it was a bit hard to see), and then into the auction house. Rows and rows of frozen tuna, all lined up for tuna buyers to inspect. According to our guide, they cut off a piece from the tail of each fish so that inspectors can see the quality of the flesh. This small piece is placed on top of the tuna. It's each buyer's only chance to see what's inside. He has to make his decision about whether to buy an entire fish (which can be very expensive), based on his expert assessment from that tiny piece of tail. This is why buyers are staring so intently at that piece.

Our guide told us that usually the tail is pretty representative of the entire fish, but you never know. The tail could be gorgeous but a chunk of the body may be diseased. Or the tail could look mediocre but the fish itself is beautiful. The buyer takes that risk. In general, it takes an experienced eye to be able to really evaluate the quality. A majority of tuna is frozen right at sea after it is caught. This is because most tuna boats go out for months at sea. The boats won't return to shore until the freezers are filled. The market does have a very small, limited supply of fresh tuna from Tokyo Bay (pictured above). These are likely very expensive and only go to top sushi restaurants who can pay top dollar for these fish. And then the auction began!

A photo can really only show so much. It's the audio of the auction that is so peculiar and interesting. The auctioneer sounds almost like he's singing as he chants with this melodic lilt. Check out the 4-minute video below to see it in action, as well as see what our whole auction experience was like. I couldn't really understand exactly what they were saying, but there was chanting, bell ringing, and some back and forth bidding. It was very interesting and strange. The first auction ended right before 6AM, and a guide escorted us back out. We returned our vests and voila, good morning Tsukiji Fish Market!

The sun had come up, and the whole place was bustling with activity. At this early hour, the main market isn't open yet, but some of the sushi restaurants are open. The most famous one, Sushi Dai, is infamous for its long, long lines. Despite the fact that it was only 6AM, the wait was already 3 hours long.

Supposedly you're supposed to line up around 4AM in order to avoid the super long waits. We decided we didn't want to wait that long (after all, we had plans to eat Japanese steak at noon that day), so we went to Sushi Bun instead, also a highly recommended place that had a much shorter line (I think we waited at most 30 - 40 minutes). Sushi Bun is one of the oldest sushi restaurants in market, if not in all of Tokyo. It's more than 150 years old, which predates even the current Tsukiji Market. This family-owned business has been passed down for four generations, and it's still going strong. Sushi Bun does not allow photography, but essentially there are only a few options. We both tried the 3850 JPY set menu (pictured above), which was definitely tasty and inexpensive, but not quite at the level of the sushi restaurants I typically visit. It's simple, a good value, and fun to experience, but not sure it's worth lining up for!

And that was it!

We were exhausted. If we had more energy, we would have stayed up until the normal markets opened to explore. However, we ended up catching a taxi back to the hotel and napping just a bit before heading out to our last meal in Tokyo - a fabulous steak lunch at Shima!