This is post #14, part of my #50PostsIn50Days personal challenge to document my first 100 days in Hong Kong. Other posts in this series may be found at the bottom of the original post.

Even after a month living in Wan Chai, I am still amazed at the number of Spanish restaurants within a 5-minute walk of where I live. Hong Kongers like Spanish food, apparently, and the multiple ones that exist all thrive.

The Optimist is a Spanish restaurant that focuses on what they called asador-inspired menu. The word asador means "spit" and refers to restaurants that focus on the grill.

It's no surprise that this second restaurant by the Pirata group is Spanish. After all, the co-owners of the Pirata group are Christian Talpo from Italy and Manuel Palacio from Spain. Their first restaurant, Pirata, was and is a roaring success (it's one of my favorite local Italian places). Their second endeavor, located in the same building but on the first three floors, is The Optimist, which opened in 2015.

The restaurant includes a bar on the first floor and dining space on the second and third floors. There's the massive grill on the second floor. The focus, of course, is the grill. You choose the meat or seafood by weight, and then they grill it for you. Portions are big. This is the type of restaurant that's great to visit with a larger group so you can order the heftier meats to share as well as sample several tapas/pintxos.

Since it was just the two of us, we opted for their Classic Tasting Menu, which would at least allow us to sample a variety of dishes throughout the menu. The tasting menu has a minimum participation of two people and costs $480 HKD per person. Mushroom Croquettes ($90 HKD a la carte) are deep fried mashed potato balls with a creamy rich mushroom filling inside. The execution was excellent and they were nice, hot, and crispy. It was fun to eat the potato strings underneath as well. Our next course was the Broken eggs "Huevos Rotos" ($110 HKD a la carte), which came with jamon Iberico, chorizo, potatoes, and eggs. This tasted like a Spanish version of breakfast, and it was enjoyable. Next came a simple salad of tomatoes, basil, burrata, and extra virgin olive oil ($150 HKD a la carte). The ingredients were fresh and the salad was tasty, though the dish seemed more Italian than Spanish. Almejas en salsa verde" ($180 HKD a la carte), a simple dish of clams cooked in garlic, parsley, and white wine, was excellent and had great flavors. 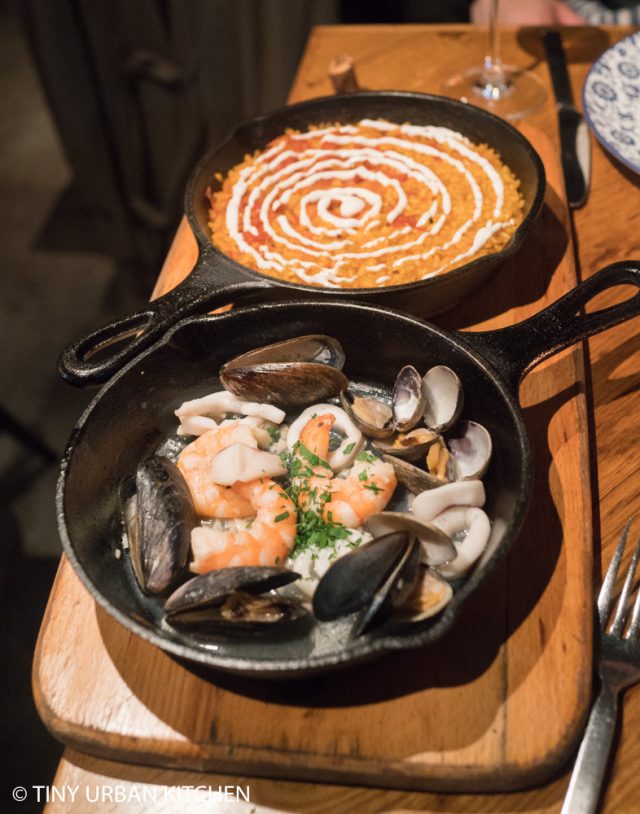 Our final course was a Seafood charcoal baked rice "Al horno". The rice was cooked on the grill separately from the abundant seafood, which included mussels, clams, blue prawn, abd squid. A creamy garlic sauce swirled in a circular fashion on top of the rice completed the flavor profile. The server mixed the seafood with the rice tableside and served it to us in a form that looked very similar to paella.

However, the bottom wasn't really that crispy. Overall, the flavors were enjoyable but I've had better seafood based rice dishes (namely paella) at other Spanish restaurants. My favorite dessert by far was the caramelized warm bread brioche "Torrija" ($75 HKD a la carte), which was served with coffee ice cream. The char on the crispy bread was fantastic, and it created such a nice caramelized toasted flavor on the outside while retaining the warn, soft, buttery brioche center. I loved it and ate way more than I had intended. 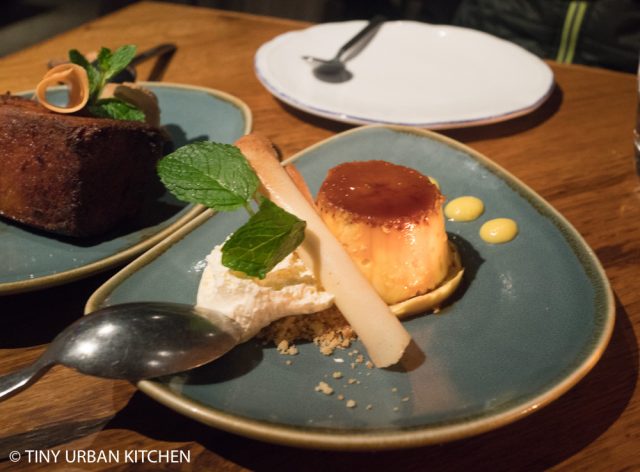 The Flan ($65 HKD, a la carte) was solid and came with a lemon cream and an almond crunch.

All in all, I thought the food at The Optimist was solid, though I'm not sure if anything really blew me away. My favorite dishes were the clams (classic but well executed) and, surprisingly, the caramelized warm bread brioche "Torrija".

I think I need to come back and try fish or meat on the grill. My guess is that's where this restaurant really shines. Unfortunately for us, they don't always offer the larger meat cuts for a party of two because it's just too big. We definitely saw people around us ordering the grilled steak and it looked fantastic.

Note, if you're a wine fan, they do have a "secret wine list" that includes some harder to find wines and some higher-end bottles. It's fun to peruse, and we ended up ordering a lovely wine from that list.

Finally, they don't charge the 10% service fee that you see at a lot of restaurants, and instead promise on their menu that all tips go to the staff.

I am pretty sure I'll be back, and I'll include an update in this post as soon as I have more information!