As a person who travels and eats quite a bit, I always struggle with the same issue of "feeling gross."

You know the feeling. You travel to some amazing destination so you want to take advantage as much as possible of the food there. You plan out your breakfasts, lunches, and dinners. Even though you aren't even hungry by the next meal, you soldier on.

I typically try to compensate by walking a TON during my trips. Still, after a few days of non-stop eating, I'm usually ready to go home, cook healthy and simple "spa food", and let my stomach take a break.

This seared sea bass dish is something I concocted recently. It's based off of other broth-based fish dishes I've had at restaurants, and the flavors are inspired by my first, unforgettable encounter with yuzu kosho, now one of my new favorite sauces.

It's clean, light and healthy. At the same time, it's complex and full of interesting flavors. I think it's the perfect antidote to a heavy week of eating out. The broth served with the fish is based off of a dashi stock. Dashi is a fundamental seaweed based stock used often in Japanese cooking. I think it's one of the easiest and quickest stocks to make from scratch, as long as you have two key ingredients: kastuobushi (dried bonito flakes shown on left) and kombu (dried seaweed shown on right).

The stuff lasts forever, so I always just keep some on hand in the "pantry" (aka the shelf in the basement). 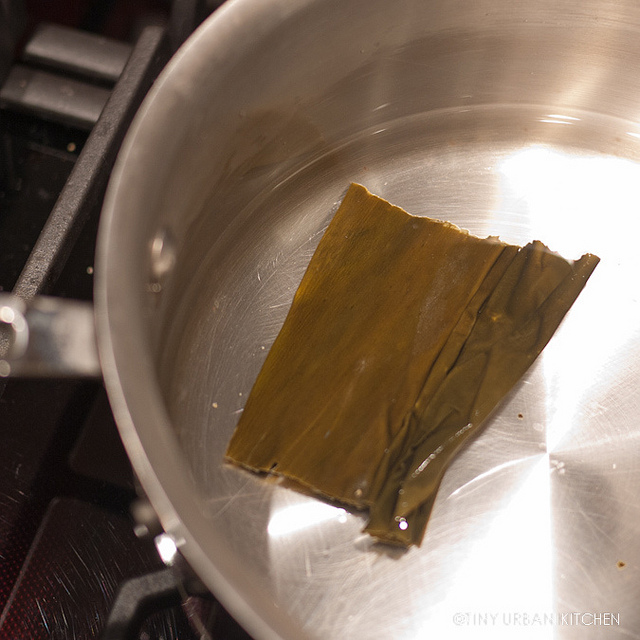 It's so easy to make this broth. Just soak the kombu in cold water for about 20 minutes. Bring the water to a boil. Once boiling, just add the bonito flakes, turn off the heat, and let it sit for about 4 minutes. Strain and use! So easy! For an even easier method, just soak everything in cold water overnight and drain the next morning. The key ingredient in this zingy, flavorful broth is the addition of yuzu kosho. Yuzu kosho is a Japanese seasoning made from yuzu zest, chili peppers, and salt. Yuzu is a Japanese citrus that looks like a lime but is much more floral in its aroma. I first discovered yuzu kosho at a little izakaya in Tokyo where they added it to their dashi-based shabu shabu broth.

I was floored by the intense floral, spicy, and citrusy notes. Even though I was stuffed from the rest of the meal, I couldn't stop sipping at the fantastic yuzu-infused shabu broth. Inspired by that meal, I decided to add yuzu kosho to my homemade dashi broth. To incorporate yet another dimension of umami, I also included some mushroom broth from these rehydrated morel mushrooms.

On the side, I sauteed some baby bok choy, though  you could really use any sort of green. Try pea tendrils, or maybe spinach. Any relatively neutral leafy green should work pretty well.

Finally, pan fry some fish to serve on top. Soak the kombu in a pot of cold water for about 20 minutes. Bring the water to a boil. Once boiling, add the bonito flakes, turn off the heat, and let sit for 4 minutes. Strain and use.

Mushroom Broth
Soak dried mushrooms in hot water for about 10-15 minutes. Remove mushrooms and reserve for another use (or you can saute them and serve them alongside the bok choy!).

Combine all ingredients in a pot and heat under just under boiling. Keep warm until ready to plate.

Heat a skillet on high heat with 1-2 T of canola oil until the oil is smoking hot. Sear fish in a pan for about 2-3 minutes and then flip and sear for another 2-3 minutes, or until the fish is done to your liking (I tend to like fish more on the semi-rare side!). In a separate wok, saute baby bok choy with a little bit of dried shrimp and dashi soup base (recipe here).

To plate, layer baby bok choy on the bottom and fish on top. Pour in the broth on the side, and serve!