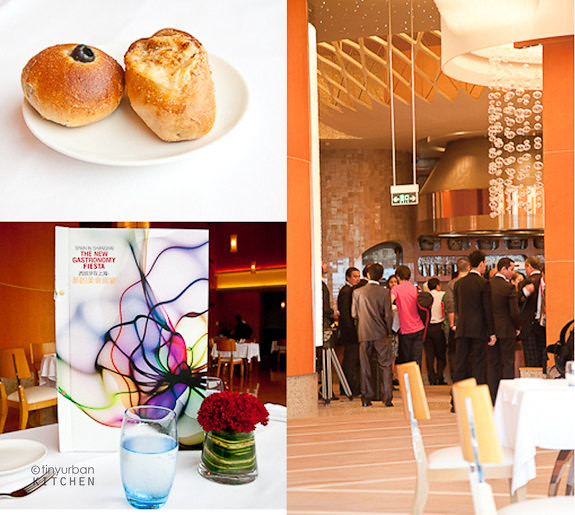 Fifteen Michelin Stars. One week.
Together, five of Spain's top chefs from the Basque region (a region known to have among the best food in the world) worked together to create a tasting menu of a lifetime.How often do you get to sample dishes from five Spanish Michelin-starred chefs in one meal? In one room?Not only that, they're ALL in the kitchen, cooking for you.Unreal. Bryan and I felt like the luckiest kids on the block when we found out we happened to be in Shanghai during the culminating week of the New Gastronomy Fiesta, a seventeen week long celebration of Spanish food sponsored by the Spanish government in conjunction with the World Expo in Shanghai.

Each week, the program highlighted a different region of Spain by bringing in Michelin-starred chefs specializing in those regional cuisines. These chefs created a tasting menu, which was served at a restaurant called Acqua in the Cuban-owned Gran Melia hotel in Pudong (the eastern side of Shanghai). We went during the week celebrating the food of the Basque Region. This unique region in Spain sits right on the border of France, and thus draws influence from both countries. It's located close to both the mountains and the sea, giving chefs abundant access to some of the freshest seafood, produce, and quality cured meats. It's no surprise that the Basque region holds more Michelin stars than any other region in Spain.

A little background on the chefs, shall we? In order, from left to right:

Pedro Subijana was born in San Sebastian and has been a renowned chef for quite some time. His 3-Star Michelin restaurant, Akelare, also sits atop a mountain overlooking both water and prairies. He has received numerous honors throughout his career for both his food and also his TV programs!

Juan Mari Arzak is chef owner of Arzak and is widely considered one of the masters of New Basque cuisine. His namesake restaurant, Arzak, has 3 Michelin Stars. He's won awards for making Basque cuisine "one of the most innovative of the world."

Martin Berasategui is another innovator when it comes to contemporary Basque cuisine. He also plays around with molecular gastronomy, creating dishes like "cheese and carabaoa oil bubble with endives, red onion juice, and Iberian bacon." Between his restaurants Martin Berasategui, Lasarte, and M.B., he has a total of 6 Michelin Stars.

Eneko Atxa, chef owner of Azurmendi (1 Michelin Star), is one of the youngest and most innovative chefs cooking in the Basque tradition. He has also won numerous prestigious awards, such as "Chef of the Future" by the International Academy of Gastronomy, an award given only to the most promising and innovative chefs.

We had a choice of the "small" tasting or the "large" tasting. Well, the large tasting had more courses to try, so of course we went with that one. 🙂

Note - the descriptions of the dishes are taken straight off the menu. They lack the normal finesse you'd see in a menu with food of this caliber. I would just attribute this to poor translation, which is not uncommon in China.

Rice souffle with hake cake, Fish mousse with lotus flower, and Pineapple with red pepper
These were fun little bites, although they didn't blow me away as being super innovative. 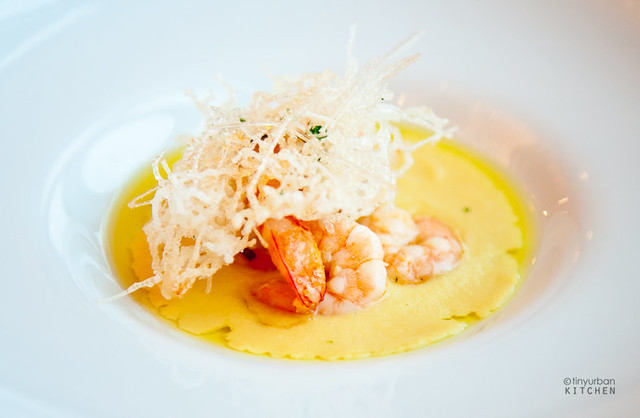 Red shrimp bunch with corn soup
Many of the dishes had slight Asian bents, and we started to wonder whether we were really tasting dishes that were representative of what these chefs would make back in Spain. Perhaps they were trying to cater to the local Chinese palate? 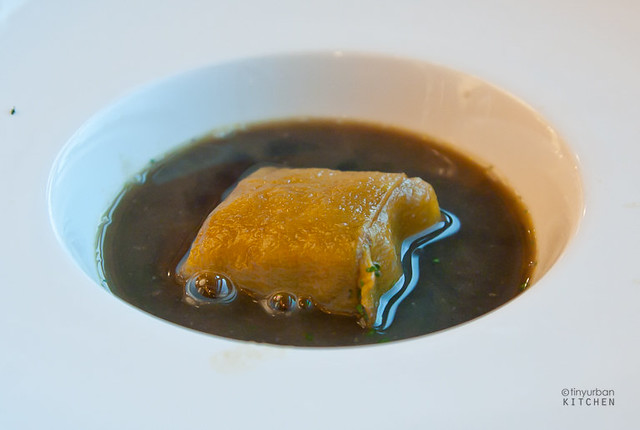 Clams with peas in green sauce
This was one of my favorite dishes. I love the "pop" of fresh peas, and in this dish they went really well with the juicy clams and the aromatic clam broth. 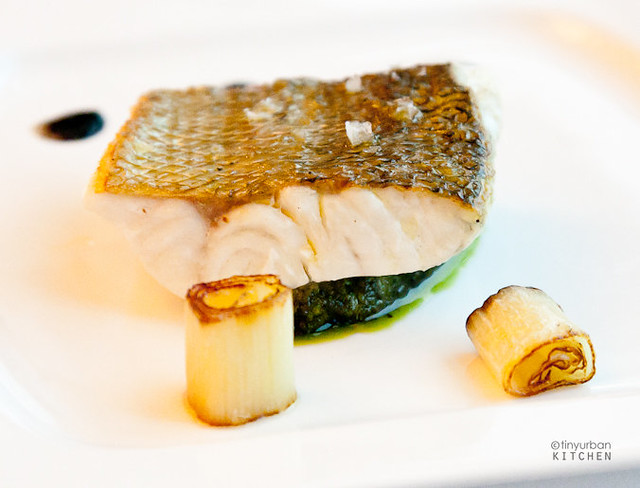 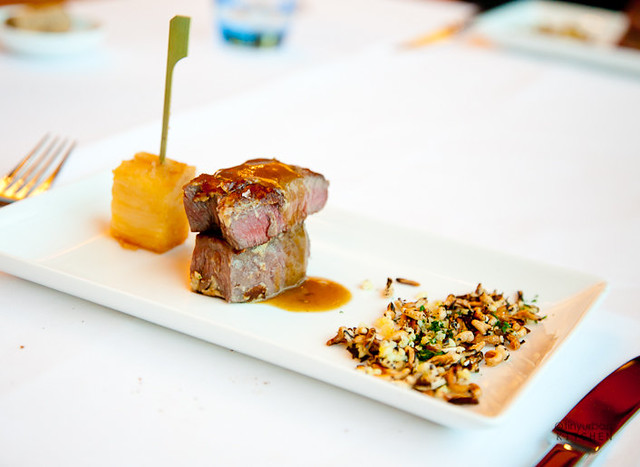 Beef brochette with oat and Saracen wheat
We were both really impressed with this dish. I was surprised how much I liked "Saracen wheat" (whatever that is). It reminded me of some sort of popped brown rice. It had beautifully toasted and grainy aromas plus a nice crunch that I just loved. 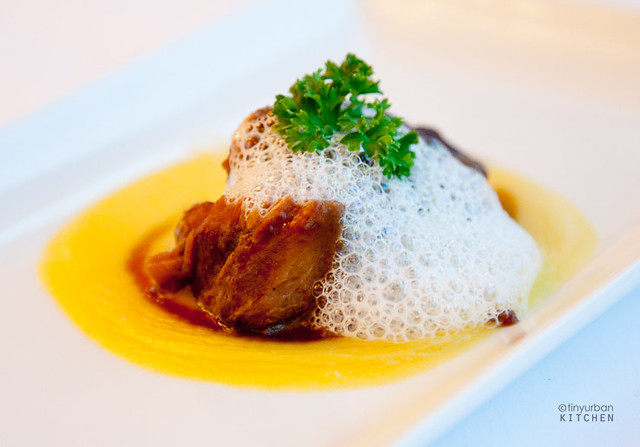 "Fruit Bubbles"
This dessert was just fun, and I'll bet it was devised by one of the more molecular gastronomy-focused chefs. This special mango-flavored puree bubbled up (most likely due to dry ice / frozen carbon dioxide), adding a unique and dramatic spin to the presentation. 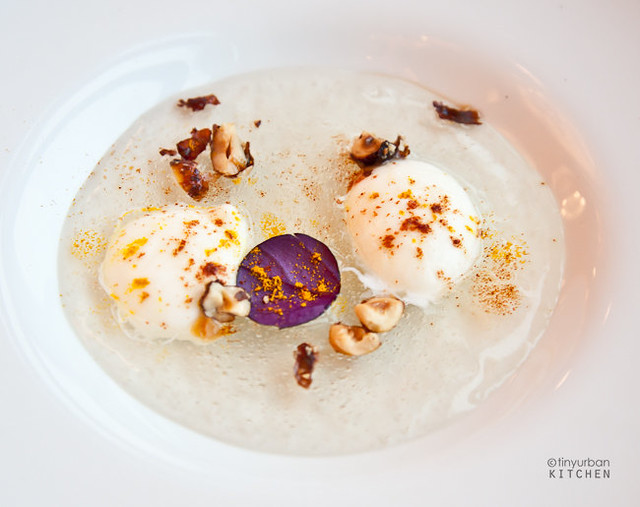 Creamy eggs with cava
Cava is Spanish sparkling white wine, and I found this dish to be really unusual and interesting. I've never had "fizzy" jello before, but the cava "gel" (for lack of a better word) underneath still retained the fizziness of the original drink, which was really interesting. This dish was fun to try, with interesting flavors and textures. 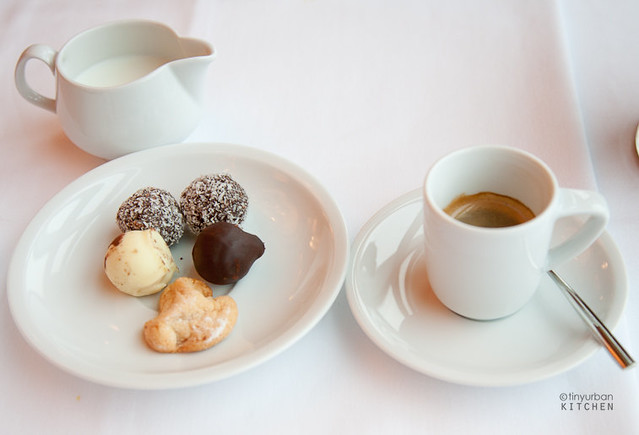 Les Mignardises / Petit Fours and Coffee
Finally, we ended our relaxing and long meal with a few cookies and chocolates plus a nice, strong cup of espresso.

It had been raining all afternoon, so it was actually a perfect day not to be at the World Expo. Instead, we enjoyed a long, lazy 10-course lunch in Shanghai (we had been unable to make any dinner reservations - all sold out for the week!) 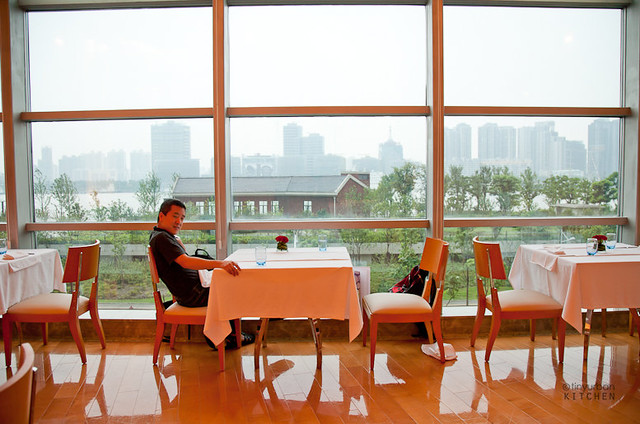 Nevertheless, trying this meal and reading about the Basque region really really makes me want to visit Spain! The region sounds picturesque and almost romantically unreal. Soaring mountains on one side, the sea on the other, plus the fertile Ebro valley that produces so much good crop - just the ingredients alone probably taste better than what we can get here in the US (and definitely the East Coast!).

Add to that the plethora of excellent chefs that have restaurants in the area, you've got an amazing foodie destination that surely won't disappoint.

I'm glad I got to experience a tiny taste of that in Shanghai. 🙂

This is part 13 of the China Series detailing my recent trip to Beijing, Xian, and Shanghai.