It's true. Singapore is a haven for all types of food.

I've spent many posts describing the phenomenal variety of casual hawker stall type food that is available on this little island. Many of Asia's best Chinese restaurants open up a location in Singapore, like Taiwan's Din Tai Fung or Hong Kong's Tim Ho Wan. On top of all that, there is no shortage of high end, European influenced dining in Singapore, with Iggy's probably being one of the most famous ones.

Awards and accolades adorn this high-end restaurant located inside the Hilton on one of Singapore's poshest streets, Orchard Road. It consistently makes S. Pellegrino's World's 50 Best Restaurants list, and was even named the best restaurant in Asia in 2012. The Miele Guide of Asia's Top 20 Restaurants listed Iggy's as number one in 2008, 2010, and 2011. The restaurant is tiny, with only 10 tables and an additional eight seats at the dessert bar. With sixteen chefs in the kitchen, that's a pretty high chef to diner ratio. They recommend making reservations over the phone, though you can submit a form online if you're reserving more than a week in advance. They'll still call you to finalize the reservation.  In order to confirm your reservation, you have to given them a credit card number. The cancellation policy states that you must cancel 2 days before your dining date (by 3PM of that date!), otherwise, you forfeit the entire amount: S$275 (~ $220 USD) multiplied by the number of diners (ouch!).

We made a reservation about 2 weeks before and had no trouble booking the exact time we wanted (7PM on a Tuesday evening). The restaurant is closed Sundays, thought it is open for lunch on Mondays, Thursday, Fridays, and Saturdays. A la carte lunch costs S$85, while the lunch tasting menu is S$150. On Mondays through Thursdays there is shortened dinner tasting that costs S$235. Finally, there is the Gastronomic Dinner tasting, which costs S$275 (S$195 for the vegetarian version). At the time of press, the exchange rate was $0.80 USD for every $1.00 SGD. We started with a half bottle of a light and crisp Riesling. I didn't get a photo of this, but we also got a hot towel which came in the form of a tiny little disc. When the waiter pour hot water on it, grew taller in front of your eyes into a hot towel. The space was warm and cozy, with most people pretty dressed up. If it hadn't been for the loud wedding that was going on outside in the hotel lobby (which we would only really hear when the door to the restaurant opened), the overall environment was reasonably hushed and formal. There was one automatic sliding door leading to the kitchen. Because we sat right next to it, we had the opportunity to peek into the kitchen every now and then and see what was going on inside. If you look closely, you can get a glimpse of executive chef Masahiro Isono on the left. We started with a variety of fun, crunchy snacks. The long black sesame cracker stick was a nod to what Italian restaurants like to give, which makes sense given Chef Isono's previous experience at a Japanese-inspired Italian restaurant in Kyoto. House made taro chips were super thin and delicately crispy. We finished our first bowl rather quickly, and they happily brought us refills.

The tasting menu began with a series of "Snacks." Burnt Oyster was an oyster that looked like it was completely covered in jet black charcoal. It came with an anchovy and parsley sage sauce.  The oyster was warm, pretty tasty, and (thankfully), didn't taste too burnt. Overall, it was a decent dish, though it did not wow us. Two additional snacks came on one slate. On the left: Sakura Ebi, a ball of deep fried whole baby shrimp tossed with curry salt and ginger. It was crunchy and reasonably tasty, though nothing particularly exciting.  On the right was Tuna Tartare with marscapone and cut crackers inside. We both loved this bite - everything from the soft, fresh raw tuna and the creamy marscapone to the crunch from the crackers. Two additional snacks came on another slate. On the left, Corn Soup was delicious. The velvety soup tasted fresh and had a nice, intense corn flavor. On the right was a Corn Frito, a Japanese deep fried corn fritter. Although it tasted pretty good, at this point I was starting to get a bit tired of fried foods.

The final series of snacks was called Truffle Real or Bluff. These beautiful dark spheres looked like freshly dug black truffles. In fact, they were deep fried quinoa and squid ink encrusted balls filled with Hokkaido crabmeat inside. Real shaved truffles lined the bottom of the plate. The (fake) truffle was crunchy (like arancini) and fun to eat, though the flavor of real black truffles was not very strong. Bryan commented that he thought the squid ink overwhelmed the subtle black truffle flavor. This second dish was an egg custard topped with several generous shavings of black truffle. Here, the black truffle was allowed to shine much more.

Sea Urchin consisted of uni (sea urchin), somen (noodles), edamame, grean pea, and yuba, a soft, tofu-like sauce, all topped with a Japanese pepper leaf. This dish was excellent. It was a cold dish that was refreshing, creamy, yet balanced. We thought the blend of flavors was very good and it was definitely one of the better dishes of the night.

Execution of plating was sometimes a bit sloppy. Although mine (pictured above), was done well, the one Bryan got had fallen over, and didn't look nearly as pretty as mine. Tuna was super fatty tuna belly (otoro) served with burrata, caviar, and fennel in a bright orange tomato jus. I absolutely loved the brilliance of this dish. The tomato jus was sweet and bright, with very real tomato flavors. The burrata added a lovely creamy accent to the rich otoro, and the caviar gave the perfect pop of briny umami to top off a phenomenal dish. This was definitely one of my favorites thus far. After all these appetizers, it was finally time to try their bread. All of their bread was excellent. We tried several: peanut, cheese, and almond. For the next course, Pompfret, a mild white fish, came steamed in a sealed plastic bag together with Kujo-neghi (Japanese green onion), Matsutake mushrooms, and sudachi (a type of lime). It was opened (carefully!) table-side. Light, subtle, yet pronounced, I liked how the earthy Matsutake mushroom added depth to the clean, healthy dish. With red meat and pork you must have red wine. After finishing our half bottle of riesling, we moved onto Iggy's own house wine, which (from what I remember) is actually from France. 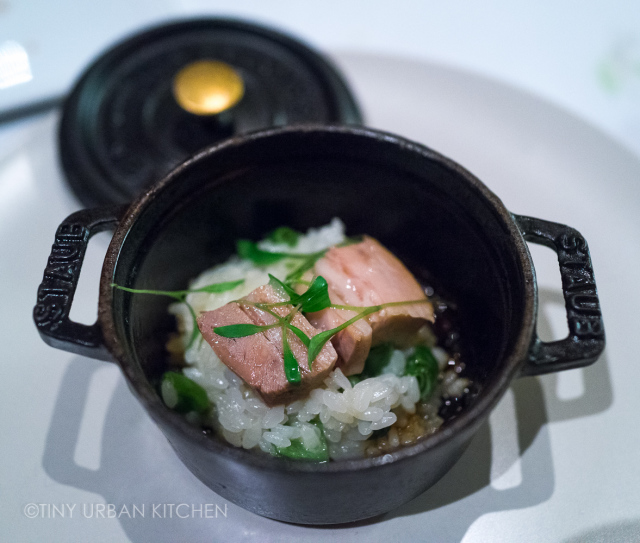 Cocotte was an elevated play on a simple Chinese dish of pork over rice. Here, tender pork belly was served over risotto and flavored with scallions, togarashi (a Japanese spice mixture), and coriander. We loved how the rice crusted to the bottom of the hot cast iron bowl (like dosolt bibimbop or paella!), giving us some crunchy rice to enjoy. Our first main course was smoked Wagyu Beef served with a simple ratatouille made with eggplant, corn, zucchini, tomatoes (on the left) and an olive sauce (middle). Overall, we enjoyed the nice smoky flavor of the Wagyu beef, though we weren't sure if the ratatouille or the olive sauce added that much more. Nevertheless, the dish was enjoyable and the beef was delicious. Matsutake was the second main course. Lightly seared Matsutake mushrooms came over fava beans, green pea puree, and yuzu. It was a nice, light dish that worked well and reminded me of spring (even though it was fall). The dessert was layered, with creme fraiche at the bottom and musk melon ice on top. Kiwi was the main dessert and consisted of a kiwi compote (underneath the huge white chocolate disc!), macadamia nuts, spherified balls, banana cream, and hanahojiso (beautiful pink flowers that have the essence of shiso). Even though I don't like banana, I thought this was a really good dessert. I especially enjoyed the macadamia nuts and the crunch that they added. We ended with a Hinoki Chocolate Box, which was filled with a selection of home-made chocolates and macarons. You could choose as many or as little as you wanted.

Bryan only took one (I think it was the wasabi chocolate), whereas I took a nice little sampling for myself. Wasabi chocolate, yuzu sake chocolate , salted caramel macaron, black truffle maracon, and chocolate with popping candy. I liked all of them, though my favorite was (surprisingly) the black truffle macaron, which was full of black truffle flavor and had a nice balance of sweet and salty. I wished for more . . . At the end of the meal I had a chance to briefly meet executive chef Masahiro Isono, who joined Iggy's in 2012 and took over as executive chef in January 2014. Chef Isono is from Japan and previously worked at Il Ghiottone, a well-known Japanese-inspired Italian restaurant in Kyoto.

General Thoughts
Overall, the meal at Iggy's was enjoyable but a bit underwhelming for the price ($275 SGD or $220 USD per person). Admittedly, the high prices partly come from the fact that they do use a lot of expensive, imported ingredients from Japan. In general everything was solid, but most dishes just did not stand out for me. Plating was a bit sloppy at times. On the bright side, there certainly were standouts, such as the Tuna Tartare, Sea Urchin, and Tuna (otoro) dishes. I would eat those again in a heartbeat.

All in all, it was nice trying one of Singapore's most famous restaurants. We still had a very pleasant meal with many tasty dishes. The service was good, and everyone was friendly. If I were to return to Singapore, however, I would probably be inclined to try another place.