It was close to noon and I was in my office typing furiously away at the computer. The caller ID said it was Bryan.

It's not unusual for us to chat during this odd time when he's away on a business trip in Asia. Tokyo is exactly 12 hours apart from Boston, which means he was probably about to go to bed. It's lunchtime here, so the timing actually works out pretty well. Bryan had just gotten back from his dinner at Sushi Yoshitake, a newly-ish minted (as of 2012) three Michelin starred sushi restaurant in Tokyo. He couldn't stop raving about it.

"I just got back from dinner. It was really good. I think you'd like it. It wasn't just sushi. They had creative preparations - like what you'd see in a high-end French restaurant - for several of the dishes. They had this abalone liver dish that was amazing. It's the best dish I've ever had in my life." 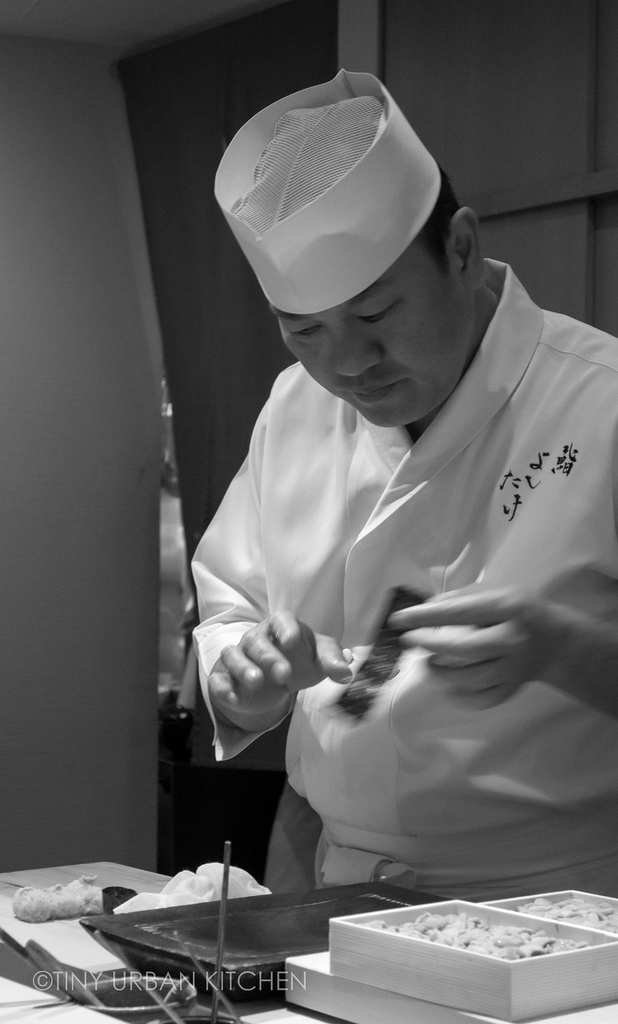 Did he just say the best dish in his life?!

This is the same person who's dined at some of the finest restaurants in the world, like Sukiyabashi Jiro in Tokyo, The French Laundry in Napa Valley, and Joel Robuchon in Las Vegas, not to mention countless other award-winning restaurants through his business trips and travels.

He couldn't stop talking about this abalone dish (and trust me, he usually doesn't talk a lot). It was like other-worldly, or what my friend Peter would call "transcendent." Perfection in so many different ways.

"We really have to go back to Japan so I can take you there."

Anyway, enough about my conversation with Bryan. Let's learn more about this incredible meal of a lifetime. , so we will all be able to enjoy (at least with our eyes) this life-changing meal. To Bryan's surprise, two other diners had the exact same camera. Keep in mind this sushi restaurant only has seven seats total. I guess high end sushi eaters really like this camera for food photos?! As he sat down he noticed that one of the couples sitting at the sushi bar was speaking English.

"Where are you guys from?" he asked.

"We are from Singapore."

"We recognize you from your wife's blog."

Bryan was floored and couldn't wait to share that on the phone with me. I still can't believe that - halfway around the world - somebody actually recognized Bryan from this little blog (hello kpbaby!). How crazy is that??! It was totally mind-blowing to me. Sushi chef Masahiro Yoshitake is really friendly with foreigners, which is definitely not something you can say about everyone. He has a reasonable command of English and introduced every course in English. He made all sorts of conversation with the guests. For example, he told Bryan that the chef from Nahm in Thailand was coming to eat here the following week.

Let's start the meal! Please note that since I did not dine there, the descriptions for the dishes will be a bit sparser than general. Enjoy Bryan's photos! The meal began with a braised turnip appetizer. Next was tender octopus (left) and red snapper (right). The "best dish", Steamed abalone with abalone liver sauce, came early in the tasting. It looks simple from the outside, but it's the beautiful flavors of the abalone liver sauce that elevate this dish beyond . . . well, any other dish in the entire world.

You start with a few pieces of steamed abalone and this verdant, creamy liver sauce. After you've enjoyed those two together, you are given some rice, which you use to sop up every last golden drop of this phenomenal, deeply flavorful, sauce.

To this day, Bryan still thinks about (and talks about!) this unforgettable dish. Yoshitake uses two kinds of red vinegar in his sushi rice, which gives it a brown color. On the left is squid (ika) and on the right is golden eye snapper (kinmedai) nigiri. The meal ended with a simple, clean miso soup.

There's not too much else to say about this restaurant except that it's excellent and you should go if you have a chance. One thing Bryan really enjoyed about Yoshitake was how he doesn't just serve straight up plain sushi. For a few of the dishes, he incorporated interesting gels and phenomenal sauces (ahem, abalone liver anyone?).

Typically it's pretty hard to get a reservation here, but since Bryan was a solo diner, he was able to nab the seventh seat without much advance notice (maybe a week?).  He made the reservation through the hotel concierge. Similar to many restaurants of this caliber, he had to fax to them a credit card number to guarantee his reservation.

Yoshitake is really friendly and can speak quite a bit of English. As I've said before, so much of the omakase experience is your interactions with the sushi chef. Many sushi chefs in Japan hardly speak a word of English, and will only take reservations in Japanese. Even if the food is amazing, you miss out on half the value of an omakase if you can't talk to the chef at all about the food you are eating.

At Yoshitake, you don't sacrifice the food or the experience.

I do hope to be able to visit some day. [update! I was able to go! Here's the post about my meal!]

If you can't make it to Japan, there's a second location in Hong Kong, renamed Sushi Shikon, which just recently got three Michelin stars.