Spherification is a modern molecular gastronomy technique that was first invented at El Bulli by Ferran Adria in 2003. While visiting a company called Griffith España, Adria and his team discovered a cool Mexican sauce with little spheres floating inside. They learned from the company sodium alginate was the key ingredient used to make these spheres.

Adria and his team got some samples of the ingredient from Griffith España and started experimenting on their own. Soon they were making all different kinds of spheres with all sorts of liquids.

Armed with sodium alginate and calcium chloride, I set out to try my own hand at making some spheres. 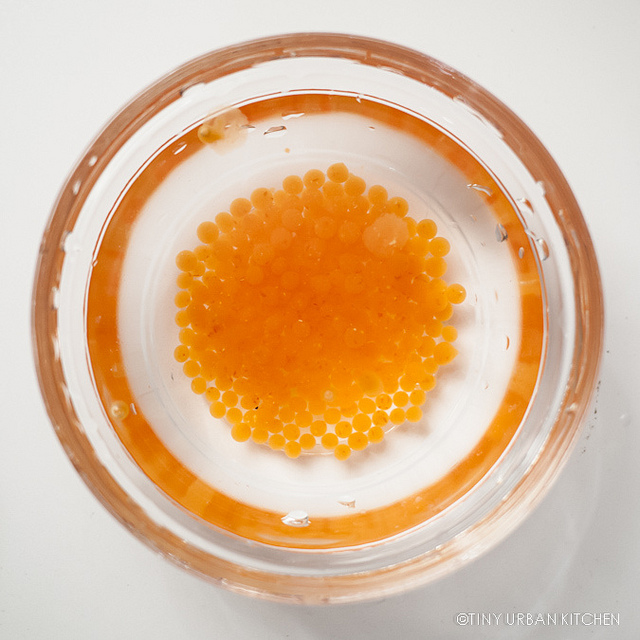 There are two key kinds of spherification techniques, each with its own pluses and minuses. If you're short on time (e.g., if you have only one day of prep time), the Basic Spherification technique is your only option. This technique is easier and is great for making small caviar-like balls. The biggest negative is that once the spheres form, the jellification process does not stop. This means the spheres need to be served immediately. Otherwise, over time,  the balls will cease to be filled with liquid, instead becoming solid, gelatinous balls. Furthermore, this method does not work as well for acidic liquids.

Reverse Spherification is a more complicated technique which requires a few days advance preparation. Instead of mixing your "stuff" with sodium alginate and adding to a calcium chloride bath, you add your "stuff" to a sodium alginate bath (thus reverse spherification). The biggest benefit is that the jellification process stops upon formation of the balls (the gel is only the outer shell, not mixed into the inner liquid), which means you can store the caviar for longer periods of time before serving.

Additionally, this method is not as sensitive to acidic liquids, giving you much more freedom in the types of pearls you can make (virtually anything!). The biggest downside is that you had to let the sodium alginate bath rest for 24-28 hours (to remove air bubbles) before you can use it. Today I will only be describing the basic spherification technique.

The first step in making spheres is the dissolution of sodium alginate in water. Sodium alginate is not very soluble in water, so it will taking plenty of agitation in order to get it to dissolve. I used an immersion blender and probably stood there for a good 5-10 minutes before the solid completely dissolved. Once in solution, bring the mixture to a boil over high heat. When it reaches a boil, remove from heat and let cool to room temperature.

Meanwhile, in a separate bowl, dissolve the calcium chloride in water (this is quite easily done). Now is the fun part! You have your two basic starting materials and the rest is up to your creativity. Essentially, mix the sodium alginate with whatever liquid you want at a roughly 2:3 ratio v/v (liquid: sodium alginate solution). You will need to experiment a bit to get the right ratio. Certain liquids were more viscous than others and I had a harder time forming good spheres sometimes. Since I was mainly experimenting, I would just use a spoon and mix a small volume (like 3 mL) of a liquid (e.g., wine, juice, or sauce) with a slightly smaller volume (like 2 mL) of the sodium alginate solution. I would then use the syringe to suck up the liquid and slowly drip my mixture calcium chloride bath. 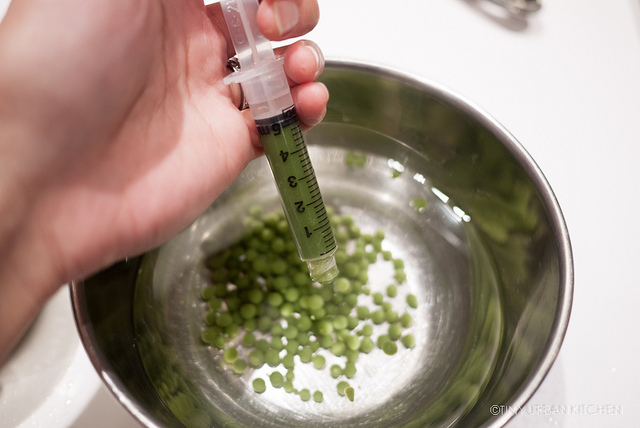 It was like magic! Instead of dispersing, the drips would solidify into little bubbles. It was so pretty. Ha ha, I know these matcha balls kind of look like peas. That's what happens if you use a pretty thick liquid on the inside (matcha powder does not dissolve easily in water!) 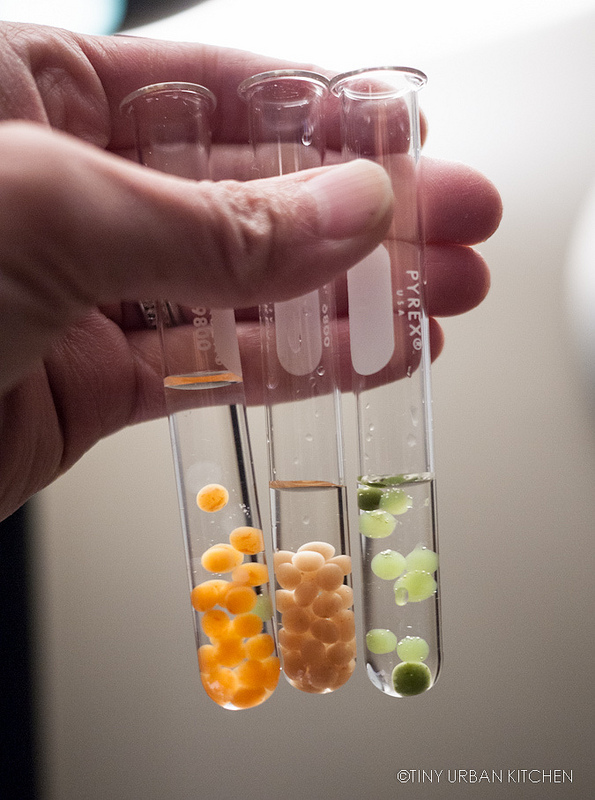 I played around and made all sorts of different kind of spheres.

Typically, the less viscous the liquid, the better the shape of the spheres. Isn't this gorgeous? I made some spheres out of red wine.

Notes on Spherification
Certain types of liquids don't work super well with this recipe. For example, if your liquid is too acidic, it won't form proper balls. One way to address this is to add sodium citrate to your sodium alginate solution to bring down the acidity of your liquid. I haven't personally tried this, but apparently sodium citrate is a bit tart and salty, so adding a bit too much could affect the flavor of your final product.

We did notice that really complex flavors were significantly affected by the chemical reactions involved. Our spherified red wine (Chateau Le Tour Carnet) lost its characteristic deep tannins and instead became much more fruity and light. The Cabernet part of the blend seemed to disappear while the Merlot portion became more pronounced. Spherified scotch whisky lost a lot of its sweet and floral notes yet maintained a strong "peaty" characteristic.

My guess is that fruity, less complex wines and drinks in general would work really well with this technique.

Dissolve sodium alginate in water, using an immersion blender to get the powder in solution (could take 5-10 minutes). In a pot, bring the solution to a boil and then let cool to room temperature. In a separate bowl, dissolve the calcium chloride in water.

In a small bowl, mix together your liquid of choice with the sodium alginate solution in a roughly 2:3 v/v ratio (liquid of choice: sodium alginate solution). Using a pipette or syringe, gently squeeze the liquid out drop by drop into the calcium chloride bath. Small spheres will form. Let the spheres "cook" for about 1 minute before removing them from the bath using a slotted spoon. Rinse with water before serving.

Note: you can continue to reuse the calcium chloride bath as you mix together portions of the sodium alginate bath with various different kinds of liquids. Have fun!