This is the fifth post in the New York Thanksgiving series. Other posts in this series include Momofuku Ssam Bar, Momofuku Ma Peche, Gramercy Tavern, and Booker and Dax.

We have always been huge fans of restaurants from the "B&B" group (Mario Batali and Joe Bastianich).

We love the pasta tasting menu at B&B in Las Vegas and had a phenomenal white truffle tasting at Babbo in New York not too long ago (post coming soon!). Bryan swears the 9-month dry aged riserva steak at Carnevino is the best steak he's ever had in the US (bested only by those in Japan), and I am a huge fan of the pizza at Pizzeria Mozza in Los Angeles.

Despite all that, we had no idea the pair had a Spanish tapas restaurant in New York City.

In fact, we found out about Casa Mono not because of its celebrity chef roots, but because we knew one of the sommeliers there. Miguel was the sommelier at that event, and paired wines with the food Jason had prepared.

When Bryan and I decided to visit New York over Thanksgiving, we contacted Miguel and found out he was working at this 1-Michelin starred Spanish restaurant. It was the first place we visited as soon as we arrived in New York. Casa Mono is cozy, a bit tight, and seemingly always crowded. Because it's a tapas bar, it's best visited with friends with whom you can share multiple dishes and try more things. Though it was just the two of us that evening, the server recommended we get 2-3 dishes per person, so we sort of went all out. Tapas range in the $15-$20 range per dish, so it can add up pretty quickly. 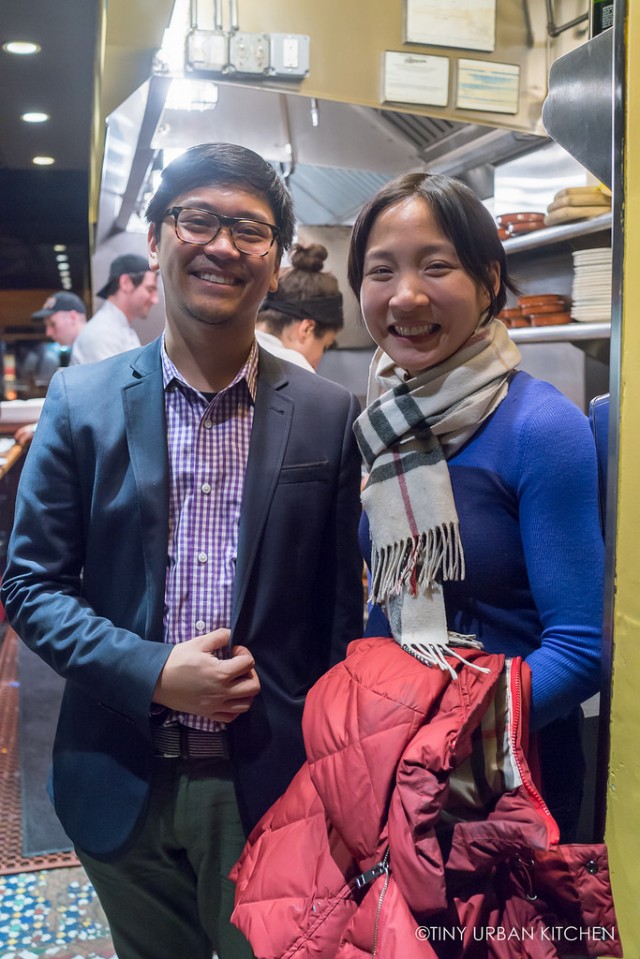 To go with our food, Miguel recommended his favorite wine on the menu, a biodynamic wine from the Catalan region of Spain called Planetes de Nin, Vi de la Vila, Porrera 2009. Cauliflower + Uni sounds incredible and was indeed delicious. An uni-flavored custard came topped with fresh uni and roasted cauliflower. The dish was rich, creamy, yet balanced at the same time. The deep fried Baby Squid Encebollados with Sherry Balsamico and Basil ($15) was nicely fried but not the softest squid I'd ever had (OK, it was a bit chewy). The fried squid was hot while the accompaniments were cold, which was unusual. I personally really liked the intense, deep, sweet, caramelized onions (the almost black mass in the photo), which added a lovely sweet and salty touch to the dish. Nantucket Bay Scallops Ceviche with Fresh Yuzu ($20), which were served in a yuzu sauce, were fantastic. The scallops were sweet, and the yuzu contributed a bright, floral essence that was nicely balanced with just the right amount of salt. The crunchy deep fried Crispy Pigs Ears with Market Apples, Kohrabi, and Montcabrer ($15) would have been heavy alone, but were nicely offset by the tart crispy apple and kolhrabi slices, Montcabrer (a goat's milk cheese), and fresh parsley. The Spanish Mackerel with Autumn Fricassee and Black Olives ($16) was a special of the day and was very good. Rhode Island Mackeral was grilled "a la plancha" and topped with a mixture of crispy roasted Brussels sprouts, leeks, cauliflower, black trumpet mushrooms, and kohlrabi. This was finished off with a flavorful black olive and balsamico de Jerez (sweet Spanish balsamic vinegar) tapenade. One of our favorites (and also one of their signatures dishes) was the Duck Egg with Mojama and Black Truffles, which came with a few lovely slices of mojama (salt cured dried tuna), shavings of black truffles, and roasted fingerling potatoes. The egg was barely cooked, and once broken, the runny egg made a lovely sauce that bound everything together. It was an excellent dish. Another favorite was the Tripe + Pork Belly Stew. The pork belly was beautifully charred and the thick broth had both an intense, sweet tomato flavor as well as a spicy and smoky richness from the pork belly. It was simply fantastic. Our dessert, Bay Leaf "Beignets" with Creme Brûlée, was a bit unusual, because it seemed to be almost savory in some ways. Whole bay leaves were breaded and flash fried. These individual "beignets" were then served with a traditional creme brûlée. It was definitely interesting, not too sweet (barely sweet!), and tasted like what you would expect. It was fun to try but I wouldn't recommend ordering it if you generally enjoy more traditional sweets. We had a great time at Casa Mono. Despite the fact that it was cold, wet, and pretty miserable outside, the cozy and lively atmosphere inside warmed us up immediately. The tapas are very good here. Chef Andy Nusser, who is also an owner, uses excellent ingredients. The kitchen staff works hard to executes the dishes at a very high level.

It's pretty amazing that the restaurant celebrated its 10th anniversary in January. Kudos to this hardworking staff for all that they do, especially in such a tight kitchen space!