This is the first post in the short series A Weekend in Our Nation's Capital, which covers the few meals I caught in DC while visiting the city for a wedding.

If you took a short stroll around the blocks between 7th and 9th street and H and E Street in DC (not too far from the National Mall, also known as Penn Quarter), it would become quite apparent that it's dominated by one very famous chef.

At one corner, you find Jaleo, José Andrés' original Spanish tapas restaurant - still arguably his most well-known restaurant. At another corner, you'll see "minibar", the flagship restaurant where he pulls out all the stops, offering a 20+ course tasting menu of whimsical bites that trick, surprise, and delight the senses in multiple ways (more on that . . . soon!). Walk a little further down and street and there's Oyamel, Chef Andrés's small plates take on Mexican cuisine.

And finally, there's Zaytinya, his Mediterranean place, the place we ended up visiting on our last day in DC. The restaurant is situation at the bottom of a tall, glass office building - not the first place you might expect to see this type of restaurant. The colorful sculpture outside helps convince the diner that, yes, this is a fun place to relax, not a stuffy, corporate location. The space is large, bright, and airy. I like how it feels like I am almost sitting outside, with huge potted trees and tall, tall ceilings. The menu consists of small plates, called "mezze", and they recommend that each person order two to three. Since it was sort of "brunch", Bryan also tried their bloody Mary, which he thought was pretty tasty. We started out with Htipiti ($7.50) (please don't ask me to pronounce that!) which consisted of marinated roasted red peppers, feta cheese, and thyme. It was fantastic. The peppers were sweet and had a lovely deep roasted flavor. The feta offered a nice, salty balance to the bright dish. We enjoyed the fantastic mezze with their house made puffy pita bread. 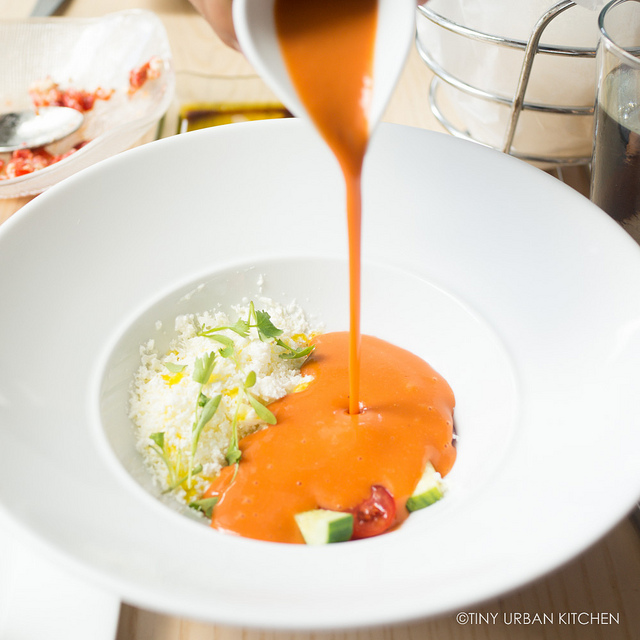 For our soup, we ordered a Tomato Corbasi, a classic Turkish chilled tomato soup made with pomegranate and molasses. This was served with Ayran (Turkish yogurt) granita and cherry tomatoes. The soup was light, refreshing, and full of that beautiful summer tomato flavor. The soup wasn't too salty at all, which is often a problem for tomato soups. The next dish was Horta Salata ($8.5), a kale salad (made from blanched, chopped kale), mixed with smoked olives, pickled red onions, and pistachios. The salad sat on top of fava Santorini, a beautiful spread made from yellow split peas and ladolemono (a Greek sauce consisting of an emulsion of olive oil and lemon juice).

I absolutely loved this dish. The flavors were fantastic. I especially enjoyed the flavorful lemony spread and how it paired with the healthy kale and crunchy pistachios. The Roasted Cauliflower ($8.50) was a simple dish that came with capers and golden raisins. Although it was pretty good, providing a nice balance of sweet and salty, the dish did not stand out the way the earlier dishes had. I felt that the cauliflower was just slightly under-roasted and was a bit soggier than I prefer. 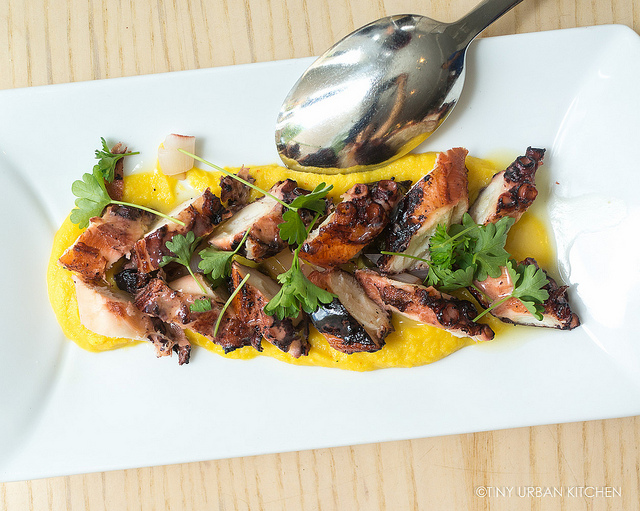 The Octopus Santorini was highly recommended, and we agree that it was fantastic. The grilled Mediterranean octopus was smoky and deeply flavorful yet gorgeously soft and tender at the same time. It came with marinated onions, capers, and a yellow split pea puree infused with saffron and lemon, a flavor combination that's characteristic of Santorini in Greece. Finally, we had one of the specials of the day, a Greek Lamb Pie made with phyllo dough. Bryan, who loves lamb, really liked this dish. It was hearty, rich, and very satisfying. For dessert, since we were really full at this point, we opted for the only dessert that was available in a mezze portion ($4 / whole portion is $8).  The Galatopita is essentially a semolina custard "espuma" (foam), served with crispy phyllo, almonds, berries, and a raspberry "mastiha" (Greek brandy-based liquer) sorbet. This was fine - nothing particularly memorable, but it was OK. Bryan tried a Turkish coffee, which was quite strong but pretty good. There's always a tiny bit of sediment at the bottom of a Turkish coffee, so just be careful when drinking it once you get near the bottom. The waiter suggested sweetening it, since most people can't handle the strength of a Turkish coffee. Bryan regretted agreeing, since he found the coffee to be way too sweet. Next time, we'll have it black. 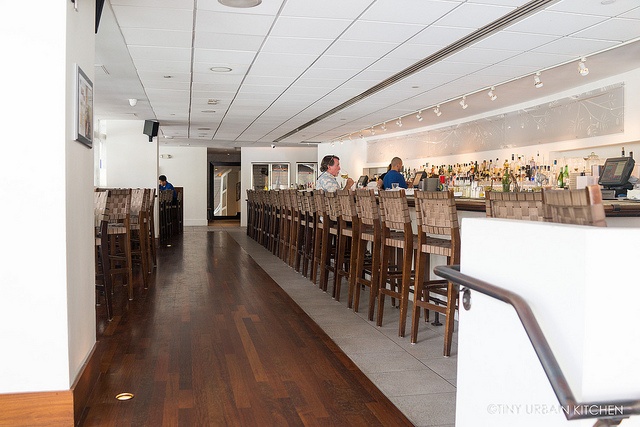 View looking at the bar

Overall I really enjoyed my meal at Zaytinya. I fell in love with any dish with the word "Santorini" in the name. Though I don't really remember eating so much lemony yellow pea puree while I was in Santorini, this delicious spread is clearly a signature flavor of the local cuisine, and I absolutely love it.

Other dishes, such as the octopus and the red pepper spread, were also excellent. José Andrés is a master at bold flavors, and he executes it very well here. We thought six mezzes for two people was quite a bit (we were so stuffed), and I do think you can probably get away with ordering a bit less. Most of the small plates hover in the $8-$12 range, so the bill can add up quickly.

Even though we tried six different plates, the menu is massive, and there are still so many plates we have not tried. It would be fun to come back with a larger crowd so I could share more dishes, thus trying even more! This is definitely a place I'd love to visit again.