This is the third post in the series title Girls' Trip to New York! Other posts in this series include Dominique Ansel Bakery and Mission Chinese Food.

Uncle Boon's has been on my mind for quite some time now.

I first heard of it about a year ago. I was at Bisq's friends and family soft opening and chatting with a chef friend whose cooking I highly respect. He was telling us about his trip to New York. More importantly, we were talking about the food in New York, and where he ate. It wasn't long before he started raving about a Thai restaurant called Uncle Boon's, declaring it possibly his favorite restaurant in all of New York City.

That's quite a statement, especially considering how many really, really good restaurants are in New York.

Nevertheless, I really trust this friend's taste, and I've been super curious to try this Thai restaurant ever since. 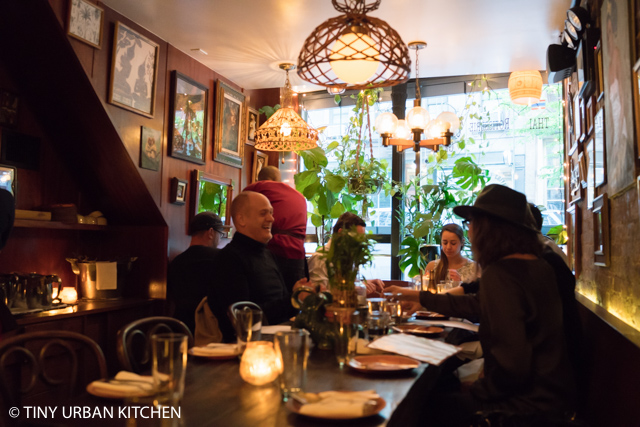 Uncle Boon's comes from husband-and-wife team Ann Redding and Matt Danzer, who met while working at Per Se. Ms. Redding was born in northeastern Thailand, and her family live outside of Bangkok. The couple have traveled extensively throughout Thailand, and draw influence from the entire country in their cooking. In 2015, the Michelin Guide awarded Uncle Boon's its first Michelin Star.

The menu is exciting and full of really interesting dishes that use authentic Thai ingredients you don't typically see in America, such as betel leaf, banana blossoms, sawtooth herb, and many other unusual and exotic ingredients. The menu includes what they call Drinking Snacks (e.g., "Heavenly Pig Ears" for $6 or "Fried Blowfish Tails" for $10), Small Plates ($12 to $16), a Charcoal Grilled Goodies section ($8-$16), and Large Plates ($21 - $28). I was thrilled to see authentic Mieng Kum ($12) on the menu, a fun betel leaf wrap filled with ginger, lime, toasted coconut, dried shrimp, chilies, and peanuts. Typically, betel leaf is hard to source. When I've tried this dish in other Thai restaurants, they substitute kale or some other leaf. I was thrilled to see the real deal here. It was a great - a light appetizer that packed a ton of flavor in a small bite. I am a huge fan of sour sausage from the Issan region of Thailand ever since I tried it at Lotus of Siam in Las Vegas. I was very curious about Uncle Boon's version, called Sai Krok Ampai, which they describe as "a grilled Issan pork and rice sour sausage". The sausage itself was tasty, though it wasn't as sour as I wished. I think I prefer the version at Lotus of Siam, but this one is still a solid sausage. We ordered some Roti ($3), an Asian flatbread, on the side. I absolutely loved this next dish, Yum Kai Hua Pli, a salad consisting of shredded spicy rotisserie chicken tossed with thinly sliced banana blossom leaves, cashews, crispy shallots, and a roasted chili dressing ($15). The flavors were phenomenal, and worked nicely together with the multiples textures in the dish. I loved it and took multiple helpings. Mee Krob ($15) is sweetbreads (or crispy cauliflower) served with a crispy rice noodle salad, peanuts, dried shrimp, egg, sawtooth herb, and tamarind sauce. Like any good Thai dish, it had a good balance of savory, sweet, sour, bitter, and spicy. We opted for the cauliflower version because were trying to eat more vegetables. It was still excellent. Finally, we ordered some  Puk Fai Dang ($7) pea shoots with garlic, Thai bird chili, and salted soy beans, from the Sides section of the menu. The salted soy beans added a nice umami to the dish, and overall it was executed really well. All in all, I really loved the food at Uncle Boon's. They are clearly passionate about Thai food and make many extra efforts to source the proper ingredients for various dishes. I loved the variety of spices and herbs that were represented throughout the entire menu. The dishes were flavorful, well-balanced, and all around delicious.

The restaurant is very popular. They take limited reservations online via Reserve, but they do leave a lot of seats open for walk-ins. We didn't want to chance it, so we made an early 5:30PM reservation. The restaurant had plenty of open seats at that time, but by the time we left (around 7:00PM), the place was packed. I highly recommend this place. It was probably one of my favorite meals of this New York trip. I can totally see now why my chef friend was so obsessed about this place. I would totally return again.