China is a vast and beautiful country. Despite the fact that Bryan and I spent over 2 weeks there, we really felt that we had barely scratched the surface of seeing everything that China has to offer. We visited many amazing historical sites, such as the Forbidden City, the Great Wall of China, and the Summer Palace. One of the best things about China is the food. You can get absolutely amazing food for really really cheap prices. We tried several handmade dumplings in Beijing (top left photo), and also tried spicy Sichuan fish (top right photo). Congee or "jook" is a popular breakfast item (bottom left photo), and of course, we had to eat Peking duck while we were in Beijing (bottom right). Oftentimes an entire meal between the two of us would cost less than $5 U.S. It was so cheap and infinitely better than the Chinese food we get in the US. Even though China is filled with cheap, delicious Chinese food, it also has its share of expensive high-end food. You can enjoy imperial banquet-type dishes that royalty used to enjoy, or sample a modern chef's take on Asian fusion concepts. Here in America, in contrast, Chinese food is almost always considered a cheap cuisine. People seem reluctant to pay a lot for Chinese food, and you'd be hard pressed to find fancy Chinese Michelin-starred restaurants (though there are a few exceptions).

The challenge for Round 3 for Project Food Blog is "create a luxury dinner party." Inspired by the foods we had enjoyed in China and as a nod to my ethnic heritage, I decided to do a luxury interpretation of Chinese cuisine. 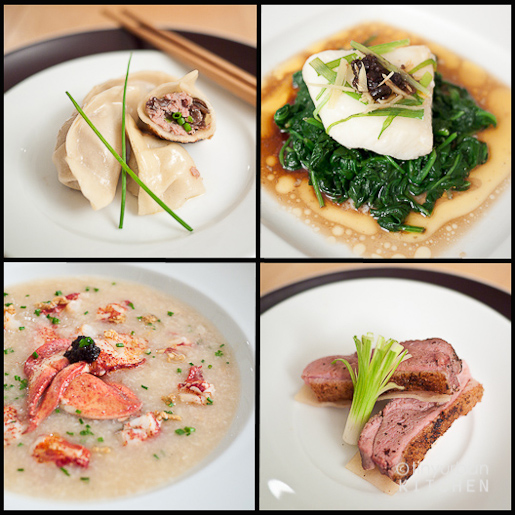 I devised a menu that was largely influenced by the foods I had enjoyed while in China.

How does one go about creating what looks like a hugely intimidating meal? In my case, I literally got home off the plane from China around midnight on Friday evening. I knew I essentially had less than 24 hours in which to create the meal, serve it, and write a post.

I called up my foodie friends Peter and Chia Chi.

I love my crazy friends who say yes to these seemingly impossible tasks. Fois Gras and Pork Dumplings
I was inspired to make these dumplings after having tried goose liver xiao long baos (soup dumplings) at my favorite restaurant in China. I didn't have time to make soup dumplings, so instead I made up my own version by mixing ground pork with scallions and fois gras. I also rolled out my own dumpling wrappers. Inspired by an absolutely divine black truffle xiaolongbao that I had also tried in China, I invented my own interpretation by mixing chopped wood ear mushrooms and scallions with ground pork and fois gras. I finished it off by drizzling in a generous amount of black truffle oil. These were also made with the homemade wrappers I had rolled out earlier.

Lobster and Scallop "Jook"
Traditional Chinese congee is made with chicken stock or water and can be filled with various ingredients such as pickled cucumbers, pork floss, peanuts, and salty duck eggs. Peter and Chia Chi suggested making a high-end version using scallops and butter/truffle oil poached lobster. This version was extremely complex to make, as it involved making lobster broth by baking the lobster shells, blending them with broth, and then filtering the mixture through a cheese cloth. Once you have the clear broth, you cook rice in the broth, creating a congee with a lovely rich lobster essence. On top of all that, you take the lobster meat and cook it sous vide at 140 °F for about 20 minutes with butter and truffle oil. It smelled absolutely amazing and tasted divine.

I have to thank Chia Chi for doing most of the legwork for this dish!

Chilean Sea Bass with Black Bean Sauce
This dish was the most straightforward, as it just involved steaming a few ingredients together. The "luxury" aspect of this dish was the use of Chilean sea bass (MSW certified!), which is a beautiful buttery fish that tastes absolutely amazing with the black bean sauce, scallions, and ginger. Peking Duck Two Ways
Bryan loves Peking duck and we had it many times while in Beijing. I decided to do an elevated version of this dish by cooking the duck sous vide and then presenting it in a slightly different way. Again, I made homemade wrappers by rolling out a dough made from water and flour and then steaming it in bamboo steamers. I tried drying out the duck as much as possible in order to ensure crispy skin. Peter was very helpful in the kitchen as he took care of searing the duck and plating it. Finally for dessert, black sesame ice cream! This is my signature dish with my friends and I've made it a million times. It incorporates a common Asian ingredient (black sesame) and makes it into a fusion dessert.

The Grand Finale . . .
And finally, after about 4 hours in the kitchen, we plated our crazy, crazy luxurious interpretation of high-end Chinese cuisine. Lobster and Scallop Jook with Caviar To top off the luxurious evening, we enjoyed dinner with a fantastic bottle of champagne.

Epilogue
I am now official exhausted! Spending the afternoon cooking at least helped keep me awake in spite of the serious jet lag that I had. Thanks so much to my wonderful friends for helping to create this fantastic meal. Seriously, Chinese food can totally be high-end as well, even though it's not really considered that way in America. Hopefully by doing this little experiment I can help you all to think a little differently about Chinese cuisine.

Thank you so much for those of you who voted for me last round. This blog entry is my submission for The Next Food Blog Star’s third challenge: A Luxury Dinner Party. If you are so inclined, please vote for this blog.  Voting for Round 3 has ended, but you can still vote for this blog in Round 4. Thanks so much for your support!