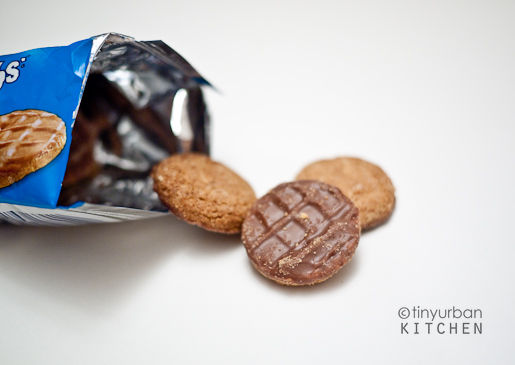 Have you ever had a Hob Nob?  For someone who loves the nutty, crunchy, goodness of whole grains, it can be quite addictive.  I've loved McVites Digestives for years (discovered them when I first visited the UK back in 1999), but more recently discovered Hob Nobs and immediately switched loyalties.  Apparently there are fierce loyalty battles between the Hob Nob Camp and the Digestives Camp.

Unfortunately, Hob Nobs are not distributed here in the US, which means you have to buy them from an import store.  A canister of my beloved Hob Nobs cost close to $6 at Cardullos in Harvard Square. The recipe ingredient list is surprisingly short, and seemingly so easy.  Is this for real? And does it really taste like a Hob Nob?  Opinions on the internet seemed varied, so I was definitely suspicious.  Nevertheless, it was so easy I couldn't NOT try it, right?  I mean, what kind of a devoted Hob Nob lover wouldn't at least try this?

Not Quite Hob Nobs
Preheat Oven to 350 degrees F

Notes:
1.  I substituted the all purpose flour with whole wheat flour to make it healthier
2.  You can use self-rising flour instead.  If you do, omit the baking powder and the salt from the recipe.
3.  I baked this in a convection oven, so it's possible that baking times may vary in a conventional oven. The Verdict?
These cookies are very crunchy and nobby, like you'd expect them to be.  They don't taste quite like Hob Nobs for several reasons.  First, Hob Nobs have no visible whole oats in them, while this clearly looks more like an oatmeal cookie.  Second, these cookies have a strong buttery taste, while true Hob Nobs are made with some sort of shortening.  Finally, these cookies are more airy, crunchy, and less dense than a true Hob Nob.  Nevertheless, the crunch is satisfying, and it's not a bad cookie.  I felt that it lacked some sort of depth of flavor, though.  Next time, I'll try using some brown sugar and also adding a splash of vanilla.