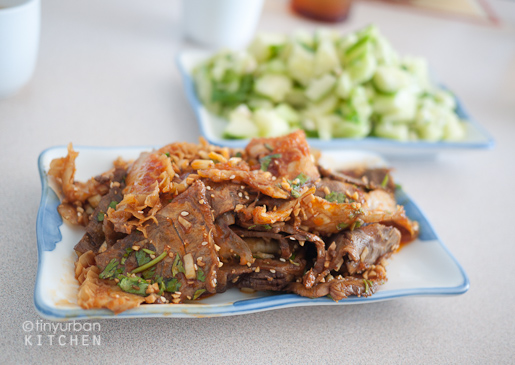 If you were to take a random person off the street in the U.S. and ask him what Chinese food was, you'd be lucky if he knew the difference between Cantonese and Sichuan food. I would be even more impressed if he knew what Taiwanese food was, or Hunan food.

And then, what if you asked him about Dongbei food?

Donbei literally means "East North" in Chinese, and refers to the area of China that was once Manchuria. A region surrounded by Mongolia to the west, Russia to the north, and Korea to the east, Donbei is far from famous when it comes to food. In fact, many Chinese southerners actually look down upon Dongbei cuisine, regarding it as more simplistic - less refined, if you will.

Defining characteristics of this cuisine would include dumplings, steamed buns of all sorts, potatoes (often stir-fried with vinegar), and lamb. They eat all parts of an animal, and it's not rare to see various types of offal on the menu. Cumin is heavily featured. Surprisingly, rice is rare, a luxury only enjoyed during the holidays. This is partly due to the poverty in the region - most rice is exported to richer areas of China. Instead, the staple is typically a combination of steamed bread (mantou), noodles, and potatoes.

I was thrilled to stumble upon an authentic Dongbei restaurant in Belmont (less than a mile from Cambridge) this past weekend. This place is the real deal. The owners ran a restaurant in China for 10 years before moving to the U.S. The food is decidedly authentic, and very tasty. Here's what we got. Roast Beef Tendon and Tripe with Chili Sauce ($7.50)
Admittedly, this is actually a Sichuan dish, but they do it really well. The spicy mala sauce has tons of flavor, and overall the dish was really enjoyable. Cucumber with Fresh Garlic ($5.95)
This dish was cool, refreshing, and tasted fine. I probably wouldn't order it again, though, since I can just make it myself pretty easily. If I am going to eat out I might as well order stuff I can't make, right? Green Bean Noodle with Sesame Sauce ($4.95)
Mung bean noodle would be a more appropriate name for this dish, which is not made with American green beans (it's confusing because mung beans are called "green-colored" beans in Chinese). These delicate, soft blocks are made from mung bean flour and tossed with a savory sesame sauce. I found this cold dish to be refreshingly light yet nutty and fragrant at the same time. I really liked it! Sauteed Shredded Potato with Sour Sauce ($7.95)
I had never had anything like this before! After one bite, I was pleasantly surprised. This dish is very classic Dongbei cuisine. Potatoes are thinly shredded and stir fried with vinegar. The potato still maintains a slight "bite" to it - it's not mushy at all. In fact, it tastes more like you are eating a vegetable than a tuber. The acidity of the vinegar adds a nice brightness that I really enjoyed. Lamb with Dry Chili Sauce ($12.95)
This dish had solid flavors, and wasn't too spicy. The texture of the meat was not the most tender in the world, but the super thin slices made up for that and the dish was overall pretty enjoyable. Pork with Chinese Cabbage / Pork with Leek (12 pieces for $6.95)
The handmade dumplings are decent - similar to those you would find at Qingdao, though I think I like Qingdao's dumplings slightly better. Some compare their dumplings to the dumplings at Wang's, though I've never been to Wang's so I can't really do a direct comparison. General Thoughts
I was really pleasantly surprised with this restaurant. Seriously, you would NEVER have guessed it from looking at the front of the restaurant. That tacky red and yellow sign does not scream "authentic Dongbei cuisine!" by any stretch of the imagination.

I have to say though - it's in a tough spot. It's in sort of a dead area in Belmont. At least it's close to Cambridge - about a mile from Fresh Pond towards Belmont. And I think Cambridge sort of has a dearth of decent Chinese restaurants, so this is really a breath of fresh air.

Overall, the food is solid and authentic. I've only been there once, but I was reasonably pleased with my dining experience. The service is good, the owners are really friendly, and the food was refreshingly unique yet enjoyable at the same time. The menu has some really unique items, such as Sauteed Snails with Cilantro, Pork Intestines with Spicy Sauce, Pork Kidney with Spicy Chili Sauce, and Steamed Beef Tripe. Of course, at the other extreme, they also have all your classic Americanized Chinese dishes such as Crab Rangoons, Chicken Wings, General Gau's chicken (although they call it General Tso's - a nod to Mandarin Chinese), and Kung Pao Chicken.

So, if you're in the neighborhood, or even if you're not, head out to Golden Garden in Belmont to get a unique taste of Northeastern Chinese food. Golden Garden has only been open for a month, so not that many people know about them yet. Definitely check them out and support them if you like their food. Let's try to keep some good Chinese restaurants close to Cambridge. 🙂