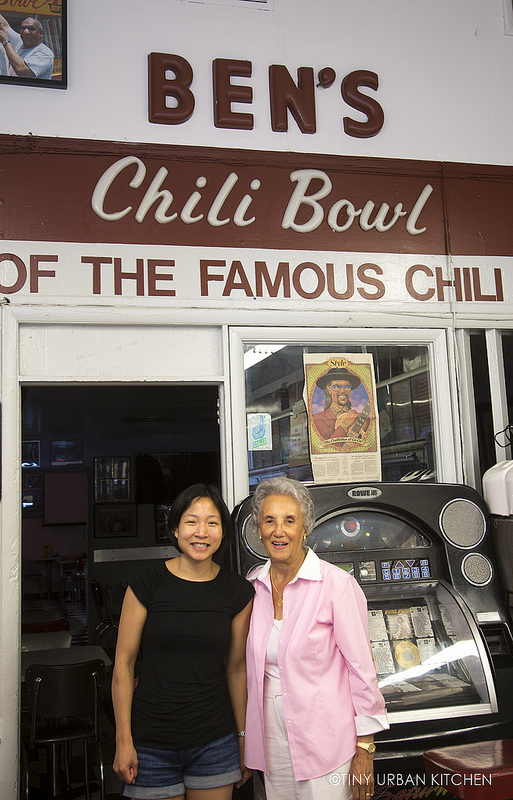 Jen and Virginia Rollins, co-founder of Ben's Chili Bowl and wife of the late "Ben" Ali.

This is the second post in the new series about my recent trip to Washington DC right on Julia Child's 100th birthday (Series overview: Happy Birthday Julia Child): Other posts in this series include Wolfgang Puck's The Source.

There's no question that this is one of the most famous and popular food places in the entire DC area.

Tourists line up around the exterior of the building just for the chance to take a bite into their famous, absolutely delicious, chili half smokes. It's the stuff of legends, really. President Obama's been there. Bill Cosby swears by it and goes all the time.

The walls of this simple, humble looking place are adorned with photographs from celebrities, old friends, and loyal customers from the past fifty years.

I first visited Ben's Chili Bowl just like any other regular tourist back in 2010 with Bryan's family. We stood in that long line to get inside to taste those chili half smokes. It was crowded, crazy, but lots of fun.

This time, I got the inside scoop.

Together with Kate, our fearless leader from Destination DC, we got up bright and early and headed over to the U Street in the Shaw neighborhood of DC. Shaw is a historically African American area that originally grew out of freed slave encampments. Black Broadway (U Street Corridor) thrived in the early 20th century as the hub of African American music and culture, bringing about greats like Langston Hughes, Miles Davis, Nat King Cole, and Duke Ellington. These days you can still see the grandeur of those times reflected in the gorgeous victorian houses that line these streets.

The most famous food institution in the area is, of course, Ben's Chili Bowl. If you come in the afternoon, you'll fight with the mobs of tourists who come to experience this significant historical place. The early morning, however, is when the locals hang out. The place buzzes with energy as the workers at Ben's dole out hearty breakfast items to the guests. In fact, the crew that works here is pretty much like family. Some of the workers have been with the restaurant for decades.

When we asked Virginia (cofounder; wife of Ben Ali, who passed away October of 2009), her philosophy on how they hired people, she said you had to let people be themselves. It's really about hiring happy people who love what they do. For example, this lovely lady in purple on the right (boo, I can't remember her name) has been with the restaurant for over 40 years.

She stuck with Ben's as the only employee back in the dark days when riots following Martin Luther King Jr.'s assassination essentially devastated the neighborhood. Further construction to build the new U Street metro station forced most businesses off the street because no one could get the the restaurants.

Ben's was one of the only businesses open in their entire neighborhood, staffed by the loyal employee, who worked tirelessly next to Ben and Virginia. It's incredible and inspiring to see the rewards of such tenacity during difficult times.

And they give back to the community.

Homeless kids in the neighborhood will sometimes come by, hungry for some food. The restaurant will feed them, but the kids have to bring a book and read it there. Afterwards, they actually get tested on the contents of the book! The folks at Ben's Chili Bowl care about the education of these kids. We asked Virgina what her favorite breakfast items were. Salmon cake, grits, and eggs. She says she makes sure to eat a hearty breakfast every morning.

"You have to eat enough food to have energy for the entire day."

Her daughter-in-law attests, "she has more energy than the rest of us!"

The staff was so kind as to bring over a ton of various breakfast foods, like these homefries, which had fantastic flavor. Similarly, the French Toast was solid. My absolutely favorite (not surprisingly) was their signature chili half smoke. It's juicy, smoky, with just a bit of heat. Definitely eat it with their famous chili, which is a must-have.

When we asked Virginia what influenced the recipe for the chili half smoke, she mentioned that Ben took inspiration from his Trinidad background and applied it to the American hot dog, which he learned about in the US. The resulting hot dog is legendary, and definitely worth trying. [More pics of the chili half smoke when served as a full hot dog here] 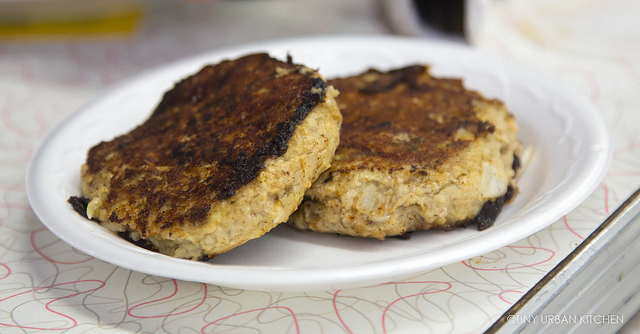 Salmon cakes are moist, flavorful, and definitely a healthier option. It's also one of Virginia's favorites. The grits come with a generous dollop of butter on top. They were alright, but I've had much better versions in the south. At the end they dropped of some sweet apples, which tasted like the inside of an apple pie. A bit sweet for me, but my palate is definitely more sensitive to sweet than most!

Alas, we had to move on.

As part of this crazy food trip, we still had to go to a food tour of U Street and Little Ethiopia before lunch.

Stay tuned tomorrow to learn about Little Ethiopia in DC, the second largest Ethiopian population outside of the capital city in Ethiopia Jen enjoying an entire chili half smoke back in 2010

For a different look on Ben's Chili Bowl, definitely check out my post from 2010 where I describe a lot of their non-breakfast, more normal menu items.

Disclaimer
This trip was part of a media tour of Washington DC paid for by Destination DC, a non-profit organization that supports the DC travel and tourism sector. The tour was provided by DC Food Tours.