Can you believe we're already in October?

It feels like it was just yesterday that I was in Norway exploring the fjords. Just recently, the weather started to really feel like autumn here in Boston. I started wearing my jacket and I finally took out my long-sleeved shirts for the first time.

It's been a crazy couple of weeks filled with tons of different activities. Last Friday, after giving a seminar about patent law as a career at a biotech networking event, I headed out for a late dinner at Grill 23 with Bryan and a good friend to celebrate the friend's birthday. Our friend had been intrigued by the 100-day aged prime ribeye on the menu (it's very good!). I tried the A5 Wagyu from Kagoshima, which was also very nice. We spent Saturday morning at church with our praise band practicing the song set for Sunday morning's service. After a quick lunch at Hi Rise Bread Company, I spent the afternoon catching up on random stuff at home. That evening, Bryan and I headed out to the Seaport Hotel's Action Kitchen to enjoy a cooking demonstration and dinner by Seaport’s Executive Chef Richard Rayment. I had never been to the Action Kitchen before - it's beautiful! It's a dream kitchen with all sorts of fancy ovens, grills, and various types of cooking spaces.

The event was done in collaboration with Backyard Farms, who supplied a ton of tomatoes for the event. In fact, tomatoes were incorporated into every single course, even dessert (!).

I've been a fan of Backyard Farms tomatoes for years now, and I've partnered with them on many types of events (and recipes!) because I truly like their product. Their greenhouse tomatoes are grown in Maine and only sold in the Northeast. Tomatoes typically arrive at a store a mere two days after being picked. This freshness, plus the company's commitment to quality, make their tomatoes some of the best tomatoes you can get off-season (which, sadly, is coming very soon). After Chef Rayment gave introductory statements, he put us to work! We donned some aprons and began splitting up various tasks. I got to man the grill (woo hoo!) something I never do at home. I charred up some beautiful summer corn. I also grilled a couple huge pieces of sirloin! Their grill is super hot and sits under a huge hood that whisks all the smoke away. If only I could have something like this in my house . . . If we got tired or needed a break, there were plenty of tomatoes, cheese, and crackers to snack on. Chef Rayment had also prepared some fun tomato appetizers before we had arrived, and we happily sampled fun tomato bites like tomato gazpacho, tomato lobster bites, and many others. While I was grilling, Bryan actually got assigned to the chopping station, which I found to be really funny because at home our roles are always reversed. I always chop, and he always grills. He did a fine job chopping, though it was pretty clear he wasn't a pro. One of organizers quipped to Bryan, "you don't do this much at home, do you?" We mixed together the chopped green peppers (thanks Bryan!) and my grilled corn to make a topping for a seared scallops dish. Another participant cooked the gorgeous scallops over this hot flat cooking surface. They turned out beautifully. Don't they look lovely with our corn and pepper side? We also enjoyed the steak that I had grilled with some house made ketchup (made with Backyard Farms tomatoes), fingerling potatoes Greek style, and baked tomatoes with pesto crumbs. It might sound strange to have tomatoes in a dessert, but the Tomato Fool that Chef Rayment made, which included Greek yogurt, tomatoes, and a bit of nutmeg, was very good. I actually really liked it because it was not too sweet at all. But if you were weirded out by a tomato dessert, they provided plenty of traditional desserts for us to try as well. We stopped by another friend's house after this dinner for late night conversation and drinks.

On Sunday after church, I spent the afternoon cooking up 14 pounds of prime rib for a kick-off party for our church's praise band (we had 25 guests in our house!). 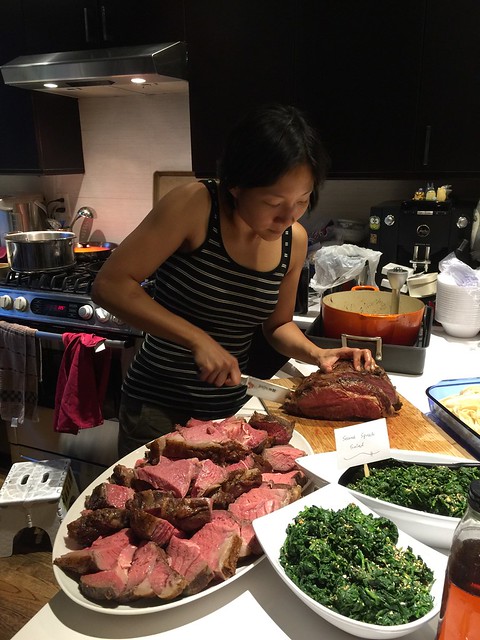 I was exhausted by Sunday evening, but I definitely felt quite productive!

Disclaimer - this event was sponsored by Backyard Farms. I did not pay to attend the event. I was not paid to write this post. All opinions are my own.