This post is the third in a mini-series about my trip to Yunnan Province in Southwestern China. Other posts in this series include Exploring Yunnan Province - Jing Hong in Xishuangbanna and Exploring Food from the Dai Minority Group.

The Akha are the second largest minority group in Yunnan Province after the Dai. They are a hill tribe residing in villages located up the mountain in China as well as in Thailand, Myanmar, and Laos. In recent times, many villages have moved closer to places that tourists can access. 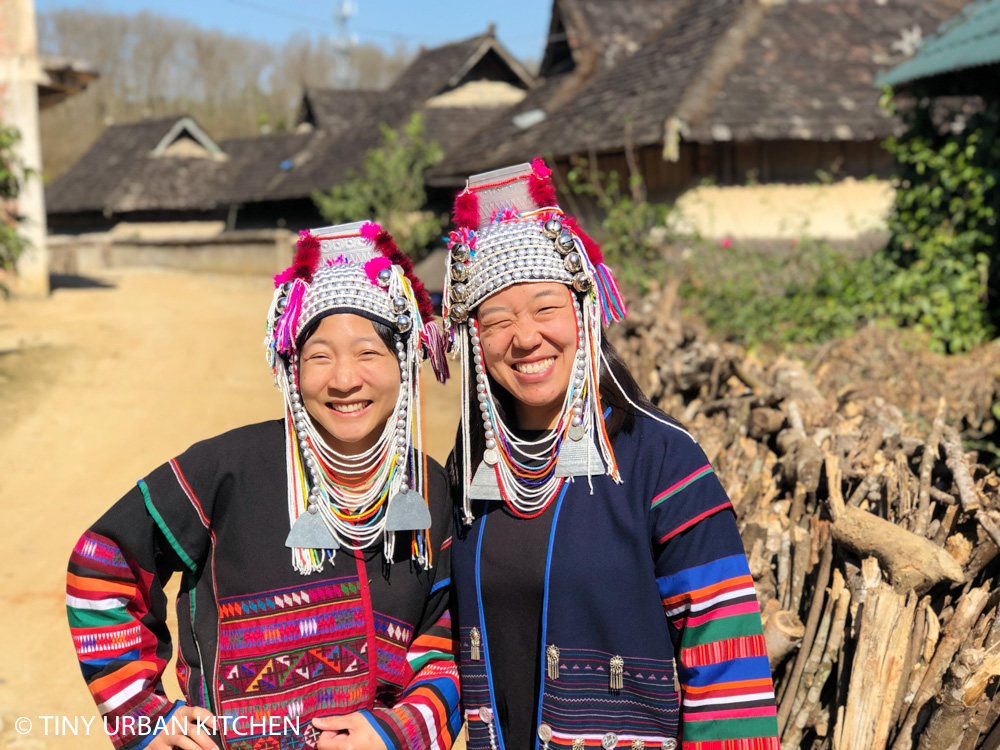 They are farmers by trade, growing tea, rice, and many other crops. They are perhaps best-known for their colorful clothing and elaborate headpieces, which I had a chance to try on during a visit to a village in Xishuangbanna. I had the chance to visit the home of an Akha family. My local friend who lives in Xishuangbanna is friends with this Akha family, and the family invited all of us to their home for tea and homemade carrot cake. It was interesting to see their home, built by hand from logs by the host's father, who passed away awhile ago. His mother was still alive and living in the house. When we dropped by, we saw her weaving an intricate basket by hand.

Visited an Akha family (friends of my local friend!) who warmly welcomed us into their home. We enjoyed freshly baked cake (yum!), visited the village and their traditional house (built by the grandfather when he was 19!), and learned about the work they are doing with their Akha community. So amazing. . Oh yes, and they let us try on some traditional Akha clothing. So beautiful!!! #akhahilltribe #yunnan #china #seetheworld #travetheworld #minoritytribes #tinyurbanxsbn

It was so cool to get to know this family and learn a bit about the work they are doing with their Akha community. For dinner that night, my local friend took us to an Akha restaurant called 阿卡寨 "Akazhai". Akazhai has been recognized as one of the top 10 minority group restaurant groups in Yunnan Province. The owner is an amazing Akha woman named Su Ying (苏英）who has done so much to improve peace in the region. She was even recognized as a UN Ambassador of Peace. At Akazhai diners get their own semi-enclosed dining spaces were they can enjoy an Akha feast while hearing live performances from Akha servers. The Akha love music and song is a very big part of their culture. The style of music reminded me of Taiwanese aboriginal music I'd heard when I was young. And the food! I will try my best to describe the food. Some of the Akha food reminded me of dishes I had already tried at Dai restaurants or other Yunnan places. Others were special and perhaps even unique to this restaurant. Akha food often involves cooking with various types of leaves, such as bamboo, banana, and others. Here, we enjoyed a whole fish (yellow croaker, a river fish) seasoned with copious amounts of herbs and chilis and wrapped in a large leaf. The fish is grilled over charcoal before being served. One of their signature dishes is "shou zhua fan" (手抓飯), which literally means "hand grab rice." It's glutinous rice mixed with beef, chopped cilantro, and scallions. I think you're supposed to eat it with your hands, ha ha, but we all used chopsticks. Rice noodles are popular in the region, and this cold rice noodle dish was balanced in its flavors of salty, sour, and spicy. I loved the freshness that the vinegar and the crunchy raw vegetable lent to this dish. The Akha have their own version of Tomato Nanmi, a version of "salsa, made from roasting tree tomatoes (楊番茄) with garlic and mashing it together with spices, aromatics, fresh chilis, lime juice, and salt. Akha like to dip fresh raw vegetables into this fiery, flavorful dip.

One of my favorite dishes was this small, pearl-sized meat ball served in a light broth. The meat ball was so soft and tender, and the flavors were delicate but perfectly balanced. Other fun dishes that I could almost imagine cooking myself at home included fried eggs stir fried with chili peppers and a simple stir fried cabbage. We met the owner of the restaurant and she told us about this root that she grows in her garden. It looks like cassava or yucca, but I'm really not sure what it is. She uses it extensively at her restaurant, whether in a stir-fry, as fried chips, or as a sweet thick soup for dessert. I loved them all! Fried chips on the left and a thick sweet broth on the right.

We thoroughly enjoyed the warmth and hospitality of the Akha people. We were really impressed with how much music the Akha people knew. We heard that Su Ying takes it upon herself to teach the younger generation these old songs in order to preserve her culture and tradition. She was such a passionate woman, full of energy and life. We really enjoyed talking to her and learning her story.

I leave you with a video of a traditional Akha song (and footage of our entire meal!)

And that wraps up the short series on my trip to Yunnan!

I felt my time there was quite short so I only had time to begin learning about the rich, diverse culture in this fascinating region. I loved meeting people from the different minority groups, eating their food, and experiencing their culture first hand. It was also lovely to catch up with old friends who have been living here for some time now. Up next! My trips to Tokyo and Sonoma (California)!