One of Bryan's favorite Taiwanese dishes is the pork noodle soup shown above. This very common Taiwanese dish is called "Ba Genh" in Taiwanese, or "Ro Geng Mian" in Mandarin, and consists of pork and fish paste nuggets in a thick soup flavored with black vinegar (or Worcestershire sauce), white pepper, mushrooms, and lots of cilantro. 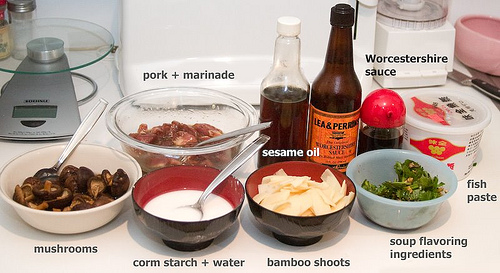 2) Mix the pork together in a bowl with the marinade and marinate for at least 2 hours.

After marinating, mix the pork with the fish paste (available in the freezer sections of a lot of Asian grocery stores. I have bought this both at Super 88 and also at C-Mart).

Combine in a pot the water (6 cups), salt (2 tsp), sugar (1 tsp), mushrooms, and bamboo shoots. Bring the pot to a boil. Form a ~1 inch "nugget" with a piece of pork and some fish paste and drop it into the boiling water.

Boil until all the pork nuggets are floating. The soup will look a little something like this:

At this point, you can do one of two things. If you want the thick soup by itself, stir the thickener into the soup and bring to a boil. You can then add the soup flavoring agents. Feel free too adjust the flavors to taste. Serve with chopped cilantro on top. Alternatively, you can boil some noodles and add it to the soup. I used fresh noodles (purchased from the refrigerator section of Asian supermarkets). Because fresh noodles give off a lot of starch, I was able omit the thickening agent since the soup was already pretty thick once I added the noodles.
Final product with noodles!