It's pretty undisputed that Kauai is one of the best - if not THE best- Hawaiian island for hiking. The landscape here is unreal in its raw, natural beauty - from the soaring cliffs hugging the ocean in Na Pali to the striated, jagged canyons of Waimea, the entire island is stunning.

You could serious live here for years, hike everyday, and not repeat a hike.

Our time in Kauai was short. Way too short. We had to be very selective about which hike to conquer. We really only had time for one big day hike.

The most famous hike in Kauai is a strenuous 11-mile hike on the Kalalau Trail along the Na Pali coastline. This trail consists of three major stream crossings, uneven and narrow ledges along cliffs, and steep and slippery terrain. Listed by multiple publications as being one of the most difficult hikes in the world, the Kalalau Trail takes at least two days to complete, requires a camping permit, and most certainly is not for the faint of heart. 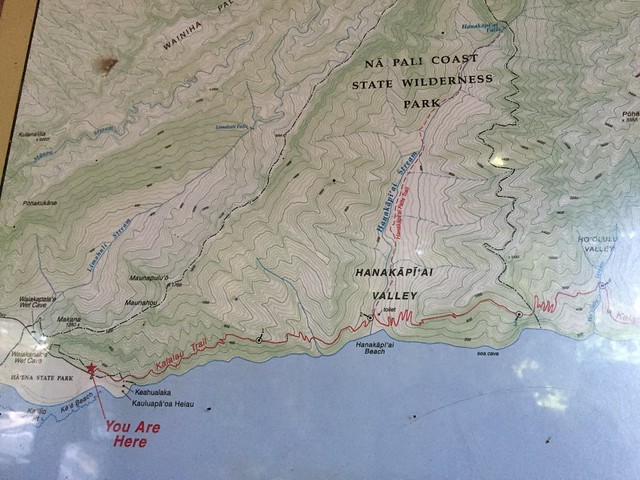 However, a very popular day hike that more people pursue is an 8-mile roundtrip loop that goes along the Kalalau Trail for 2 miles and then follows a 2-mile upstream detour along a river to Hanakapi'ai Falls before heading all the way back (4 miles).

And even though this trail is much, much easier than hiking the entire Kalalau Trail, it was still by far the most difficult hike I'd ever done. The first part of the hike wasn't so bad. It does required a certain amount of fitness, since it involved a series of ascents and descents along the coastline mountains. However, the trail itself was dry, flat, and relatively easy to hike. Plus, the views of the mountains with the ocean backdrop was just stunning. 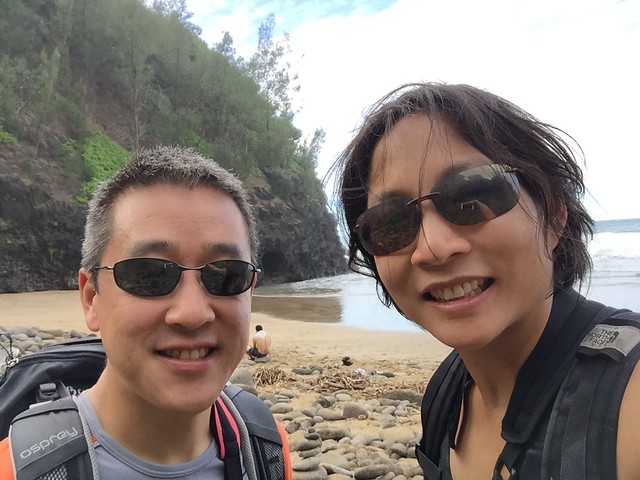 After a few ascents and descents of about six hundred feet in elevation, we finally ended back at sea level at Hanakapi'ai Beach (2 miles). A lot of hikers end their hike here and just turn around. Frankly, it's not a bad place to stop. The views of the oceans are gorgeous, and the scenery up to this point are phenomenal and probably (in retrospect) the best ones of the whole hike. 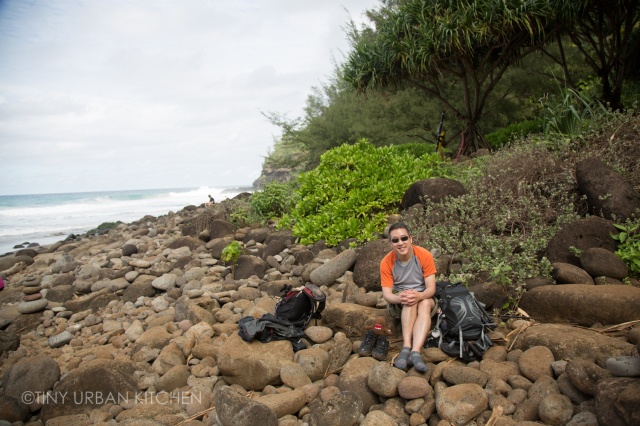 Bryan and I brought sandwiches, so we enjoyed a relaxing picnic lunch at this "rest area" before continuing up to the Falls. Moss-covered rocks started to appear. We encountered steep inclines that were filled with uneven, wet, and very slippery rocks. I was so thankful to have my trekking sticks with me. I can't imagine how much harder it would have been to climb (and descend!) these treacherous rocks without the sticks! And then there were the numerous river crossings!

It would not have been so hard had we brought waterproof shoes. However, we just had our hiking sneakers, so we tried to avoid walking in the river by hopping along the (slippery) rocks.

It was challenging, for sure, and we didn't always make it across dry! I lost a pair of sunglasses to the river. We both eventually gave up on trying to keep our shoes dry.

This second part of the hike felt much more difficult than the first two miles. As we continued up the wet, rocky, steep, and slippery terrain, we found ourselves asking people on the way back, "is it close? how much further do we have?"

The muddy terrain and wet, slippery rocks made everything so much harder. 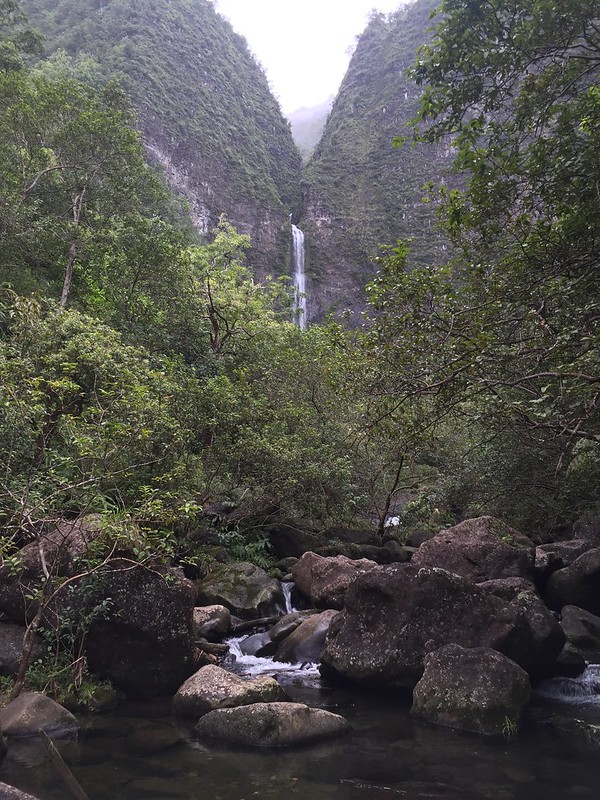 And then . . . . there it was. Our first sighting of the waterfall. We were running behind schedule, so we knew we couldn't stay long. Our goal was to make it back to the trailhead before sunset. The thought of trying to descent those slippery, rocky parts of the trail in the dark really freaked us out.

During warmer months people like to jump into the swimming holes and play in the water. We definitely didn't have time for that.

Oh, and did I mention that it started raining? Like nonstop?

I had wanted to play around with my new darkening filter on my camera to try taking those dreamy, fuzzy waterfall shots. Unfortunately, the rain made everything so hard that I sort of gave up.

I did try a few shots, and I think I succeeded, maybe? Does the right photo above look like those fuzzy waterfall shots? I'll have to try again some other time when it's not raining so hard.

We knew we had to book it, so after a few photos, we turned around and started the long and difficult hike back.

I have very few photos from those first two miles back to Hanakapi'ai Beach. This is because it was raining so hard by this point that I had decided to put my camera away. By this time, we only had one goal: get back to the trailhead as quickly as safely possible.

But then, on the last leg of the trail, we stopped in our tracks. It was sunset, and the sky exploded into a breathtaking palette of colors.

It was absolutely breathtaking.

I didn't care. I just had to capture the moment.

I quickly grabbed my phone and snapped a few photos of Bryan with the unforgettable backdrop. Bryan got out his point & shoot from his pocket and took a few more of me. The SLRs stayed safely within our backpacks, even though the rain had stopped by this point. And then, just for a brief few minutes, a dazzling rainbow appeared out of nowhere, dropping straight into the ocean.

I was about to burst from the overwhelming beauty of the whole scene. It was unreal.

And because virtually no one else was on the trail at this time (heh, most people had already returned to the trail head), the moment felt even more special.

It was our rainbow. The sun disappeared behind the horizon and temperatures started to drop. We were close to the trailhead. Thankfully, we had miscalculated sunset, not realizing that the sun sets a lot later in Kauai than it did in Maui. We had an extra 45 minutes of dusk, which was just enough time for us to make it back to the trailhead.

It had been such a hard, hard trail and it felt victorious to make it back successfully. Even though there were parts of the trail where I was downright miserable, overall I've never felt a greater sense of accomplishment after a hike.

Plus, the crazy views, especially at the end, made it all completely worth it.

This post is part of a larger series on our two week trip to Hawaii. Other posts in this series!