What a Spain-filled year it has been! I always felt that my European experience was incomplete without a visit to Spain. And this past year, I got to visit both Madrid and now Barcelona.

I fell in love with Spain when I first visited Madrid. I thought that city was full of history, culture, and life. The food was phenomenal - incredible jamon, wonderful tapas, excellent wine, and some of the best olive oil in the world. Best of all, the prices were a bit more approachable in Spain than in other European cities. I didn't think I could love a Spanish city more than Madrid, but I really, really fell in love with Barcelona, maybe even more than Madrid (!). The city was beautiful, filled with incredible architecture by the famous Catalan architect Antoni Gaudí.

Barcelona is a wonderful city to explore. There are so many interesting places where you can just walk around and soak in the energy of your surroundings. People love being outside. There is no shortage of wide open public spaces (plazas), tree-lined wide pedestrian walkways, and tons of art and cool buildings.

And of course, there's the food, which alone require several blog posts to fully describe!

Here's a brief overview of our trip (a Barcelona trip report!) plus some highlights of restaurants we visited. Of course, as always, I will go more into detail on many of these restaurants as we kick off this new series! We flew red-eye direct from Boston to Madrid via Iberian Airlines (codeshare with American Airlines), arriving the next morning, a bit bleary-eyed, a bit zombie-like. Thankfully, we were able to check into our room in the morning. After freshening up a bit, we headed out to Basilica La Sagrada Familia, undisputedly the number one attraction in Barcelona.

The massive church is an astounding piece of architecture, designed by Antoni Gaudí who devoted his life to this project. Crazy thing is, after more than 100 years of construction, it's still not done. The government is working hard to complete it by the 100th anniversary of Gaudí's death, 2026.

Despite the ongoing construction, it is still an awe-inspiring building. Gaudí's style is whimsical, artistic, and just really different from the traditional styles you see at most churches. He really respected nature, often imitating it and incorporated it into his work. One of my favorite aspects was the tree-like "pillars" inside the church. I absolutely loved visiting this place, and look forward to visiting again when it's closer to completion (or maybe even complete!)

Tip: definitely purchase tickets online before you go. You can save a LOT of time by avoiding the ticket line when you go. Book early if you want a good time, since they only sell a certain number of tickets online for each time slot. That night for dinner, we visited 2-Michelin starred ABaC, one of the few high-end restaurants that was open on a Sunday evening (our first day in the city). The meal was lovely, and I'll share much, much more about the actual meal in a future post. The next day, we walked around Las Ramblas, a beautiful tree-lined pedestrian walkway filled with shops, cafes, and stand vendors on both sides. Yes, it's a bit touristy, but it's still lovely and we very much enjoyed strolling along the way and just soaking in our surroundings. There are many places right on Las Ramblas that cater to tourists and don't have great food. However, we did find a lovely little tapas bar right off the beaten path, maybe a block off of Las Ramblas called Cañete Barcelona.

I was thrilled to sample the pan con tomate, a simple rustic dish that consist of just bread, garlic, olive oil, and tomatoes. The bread was perfect - thin, flat, crispy, yet full of holes to soak up the fresh tomato "sauce". The food was excellent, the staff was really friendly (and spoke excellent English!), and the ambiance was warm, lively, and fun. All the workers really seemed to love working there. 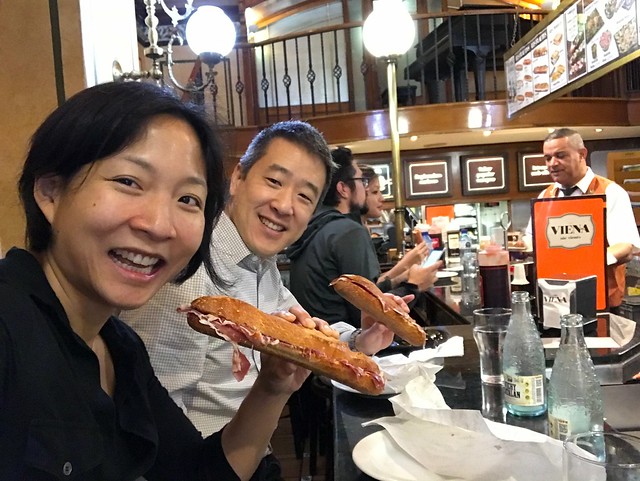 We also discovered this really famous jamon iberico sandwich shop right on Las Ramblas. Cafe Viena became famous when Mark Bittman of the New York Times called their jamon sandwich "the best sandwich I've ever had." The sandwich is indeed pretty spectacular (and only $6!). We came back once more on our last day to enjoy one last sandwich. We visited other works by Antoni Gaudí, like the private mansion he had built for the Batllo Family (Casa Battlo), which was really interesting because you can explore the entire house; or La Pedrera (picture top left), a Gaudí-designed apartment building that is still being actively used, so we could only visit the rooftop (very cool!), a sample unit, and a museum on the top floor.

Park Guell (picture top right), another Gaudí masterpiece, is a public park filled with gardens, statues, and other structures designed by Gaudí. It was originally meant to be a housing development, but never attracted enough buyers. It became a public park in 1926 and is considered a World Heritage Site.

Tip: In general, buy tickets in advance online for Casa Battlo and La Pedrera to avoid lines later. These are still among the most popular attractions in Barcelona and there are often long lines to get it, especially during peak season. It's worth buying tickets in advance to access the "Monumental Zone" in the park (the rest of the park is free).

Tip 2: Park Guell is a bit further away from most of the other sites. We left a bit later and it was hard to find a taxi to take us back down to the central area. I believe there are numerous buses that go to the area. For dinner, we enjoyed a lovely Spanish meal at Rias de Galicia, one of the most popular and highly regarded seafood restaurants in the area. Their fancier cousin is Espai Kru, a crudo focused seafood restaurant that was closed on Mondays (the day we went). The next day, Bryan had to go to his conference, so I took the train myself to MontSerrat, a monastery high up on top of a mountain about an hour from Barcelona. The views were breathtaking, the hiking was spectacular, and overall the visit was really interesting. I'll share more about this fascinating place in a separate post. It's definitely worth visiting if you want to get away from the city for a day. That night, I dined at Dos Palillos, a very trendy Japanese-Spanish fusion restaurant by Albert Raurich, former head chef of E. Bulli. Because I did not have a reservation, I showed up right at opening (7:30PM) to grab one of the 12 bar seats at the front of the restaurant. Here you can order the tasting menu items a la carte, which is pretty fun.

The next day my flight left in the early afternoon. We strolled back out to have one more jamon iberico sandwich from Viena Cafe before I headed out to the airport. It was a very, very short trip.

However, I saw enough to know that I want to come back. There's still so much more to see!

I leave you with a short crazy story about my flight home.

First flight from Barcelona was delayed a lot. Had a super tight connection and had to RUN like crazy to the super far gate at Heathrow. Lady checking in my ticket told me "run!!!!!" My bag at security was stopped for extra check (nooooooo!). "Sir - my flight leaves in 15 min." He was kind and moved quickly. Then I dropped all my coins on the ground. A nice British man helped me pick them up. "Slow down!" he said. "I can't! Flight leaves in 15 min" "Oh, ok then, you must hurry!" I ran and ran to catch the shuttle to the satellite gate. On the shuttle I texted Bryan "pls. pray - flight leaves in ~15 min. Gate closes in 2". . I arrived huffing and puffing at the gate (carrying my rolly while running up the escalator - soooooo tiring). Thankful to see others running alongside with me. . I arrive! I make it! "Your seat has changed." (Whaaaaat? Did they give away my seat!??) You are now in seat 19J, business class. (!!!!!!!) Ha ha, maybe I should always ask Bryan to pray for my flights. ???? . Now finally catching my breath, letting the sweat evaporate, and settling into my new totally unexpected upgraded seat. (I didn't even know BA could upgrade AA people.). . Maybe I will have one of those glasses of champagne they pass around. ???? . Cheers to being back in Boston soon!

Stay tuned as we kick off the Barcelona series diving into several of the restaurants I mentioned above. Also, we have not actually finished the Madrid series yet, so you might see a couple more posts from Madrid!