This is the seventh post in the Weekend Trip to Chicago series. Other post include Topolobampo, Frontera Grill by Rick Bayless, Giordano's Pizza, Portillo's Hot Dog, and Lou Malnati's.

One of the most difficult reservations to get in Chicago is at Girl and the Goat, a trendy bustling restaurant in the West Loop area of Chicago. Chef Stephanie Izard, the first female ever to win Top Chef, opened Girl and the Goat in 2010 with business partners from BOKA restaurant group. 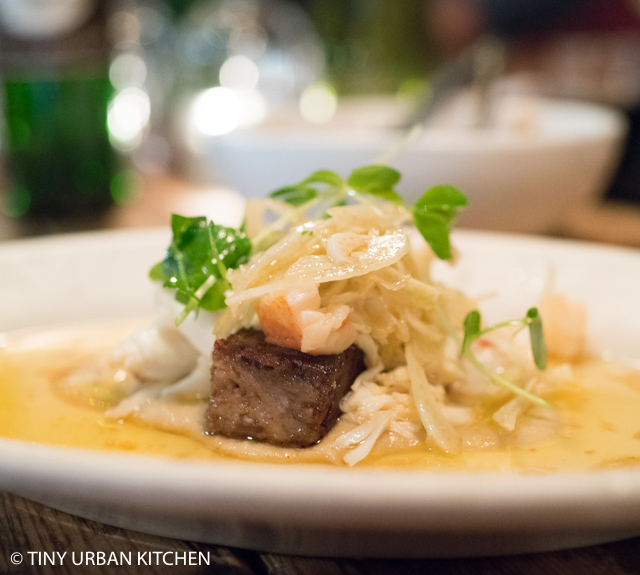 I am so thankful that my friends are excellent planners, because they had the foresight to reserve a table for a party of six at Girl and the Goat three weeks before our planned trip.

As soon as I stepped into the restaurant, I could totally see why. Even at 9PM on a Sunday evening, the place was packed.

The menu is split into three sections, "V" for vegetables, "F" for fish (really, seafood), and "M" for meat (land animals). Most of the dishes are on the smaller side, meant for small plate style sharing. There are a couple larger "main course" type dishes, but in general, the idea is to share several dishes, ordering about 2-3 dishes per person depending on the size of the dishes. Our table of six ordered twelve dishes across the menu plus three desserts, which was just about right. Kohrabi Salad ($10) came with fennel, Evalon (a semi-firm goat's milk cheese from LaClare Farms right outside Milwaukee), blueberries, and toasted almonds. I remember loving the flavor of the creamy dressing, which reminded me a bit of tahini, miso, or some sort of nut paste. The salad was both sweet and salty, and nicely balanced. Wood Grilled Broccoli ($13) was nicely charred and came with a smokey bleu cheese and spiced "crispies". Hamachi Crudo ($16) with crisp pork belly, chili aioli, and caperberries was tasty but difficult to share among six people. We really enjoyed the Grilled Baby Octopus ($17), which came with guanciale, fava beans, pea tips, and pistachios tossed in a lemon vinaigrette. Wood Oven Roasted Pig Face ($19) came topped with a sunny side egg and served with a  tamarind, cilantro, and red wine-maple sauce along with crispy potato "stix". The Crisp Braised Pork Shank was quite a generous portion, and came with buttermilk dressing, stone fruit kimchi, and naan (Indian bread) on the side. I enjoyed the Olive Oil Cake & Gelato ($9), which consisted of a slice of olive oil cake served with limoncello gelato, raspberries, pistachio crumbs, and strips of candied lemon. My favorite was probably the Berries & Cream, a fun plate composed of Chateau d'Orignac gelee, lime, and frozen buttermilk meringue pieces. The blueberries had crystallized sugar on the outside, making them look frozen even though they were not. A nostalgic "take me back to my childhood" - type dessert, the Caramel Corn & Malt Balls came with popcorn caramel and vanilla malt gelato topped with chocolate magic shell (so fun!).

The food is creative at the Girl and the Goat. Chef Izard likes mixing up opposing flavors, like sweet and savory or charred and tart. I like how she incorporates textural variety into a lot of the dishes - some rice crispies or breadcrumbs to add crunch, for example.

Chef Izard is not afraid to push the envelope. Sometimes it's brilliant, other times it doesn't work for everybody. Bryan didn't love the food. He doesn't like sweet flavors, and there were plenty of dishes here that incorporated either some element of fruit or sweetness.

There are also several goat dishes, which is not for everyone (there are plenty of non-goat dishes from which to choose).

All in all, I enjoyed the food at the restaurant. There were definitely some fun dishes. In general, I enjoyed the earlier dishes more than the larger format, meat dishes.

Is it worth the hype? Not sure. It might not be my top choice restaurant, but it's worth checking out.